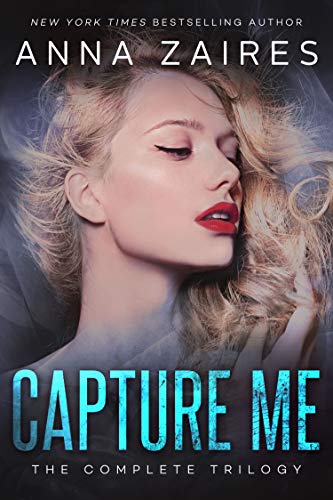 Capture Me: The Complete Trilogy

He's my enemy... and my assignment.
One night—that's all it should be. One night of raw, primal passion.
When his plane goes down, it should be the end. Instead, it's just the beginning.
I betrayed Lucas Kent, and now he'll make me pay.

"Yulia," he whispers, staring down at me, and I know he feels it too, this pull, this visceral connection between us. He may have all the power, but in this moment, he's as vulnerable as I am, caught in the grip of the same madness.

Forced to join a secret intelligence agency at a young age, Russian interpreter/spy Yulia Tzakova is no stranger to dangerous men. But she's never known one as ruthless and compelling as Lucas Kent. The hard-edged mercenary frightens her, yet she's drawn to him—to a man she has no choice but to betray.

Second-in-command to a powerful arms dealer, Lucas Kent has never met a woman he's wanted as much as Yulia. Obsessed with the beautiful blonde, he'll stop at nothing to capture her and make her pay for her betrayal.

From the icy streets of Moscow to the steamy jungles of Colombia, their dark, all-consuming passion will either crush them or set them free.