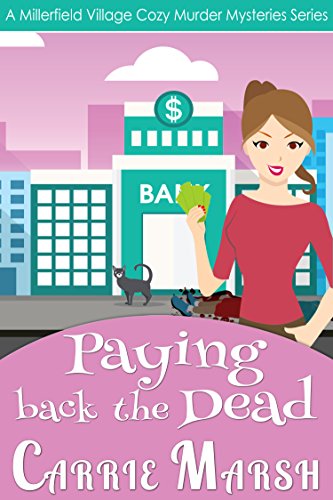 Paying Back The Dead

Laura Howcroft is more than content with her clam, tranquil existence. But when she discovers she has a cousin, an encounter that rapidly uncovers an unexpected murder, Laura knows that the only way to help out is to investigate for herself. Can she find the killer before her cousin takes the fall?

Paying Back The Dead is a cozy mystery & thriller fueled by the baffling crime and brilliant sleuthing investigation skills of pretty Laura--and the race to solve a murder mystery of a distant relative before the murderer strikes again. This time who will be the target?

The only thing worse than death is taxes…

With two solved murders behind her, Laura Howcroft is more than content with her calm, tranquil existence as The Woodend Cottage Hotel receptionist. Little more than year in the small village of Millerfield and Laura has already seen enough bloodshed to last her a life time. Things have been quite recently in the small British village and Laura can only hope they stay that way. Peaceful, calm and simple.

But when Laura discovers she has a cousin in the village, an encounter that rapidly uncovers the unexpected murder of her cousin's husband, Laura knows that the only way to help out is to investigate for her. With the Police pointing fingers at Judy Hugh, the wife of the recently deceased local tax-official, Laura, Howard and Monty are on the trail again.

After all who in their right mind would want to murder a much-mistrusted tax official..?

Can Laura uncover the real killer that left a tax-man horribly murdered?

Or will her own recently-rediscovered cousin take the fall for the death of her husband?