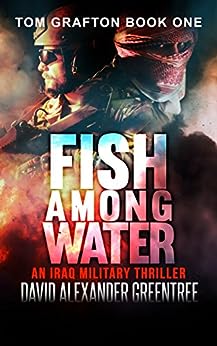 After beheading one of the imams of Mecca, al-Jalaad fled to the al-Qaeda stronghold of Mosul. Grafton has been sent to root him out.

After beheading one of the great imams of Mecca, Al Jalaad fled to the Al Qaeda stronghold of Mosul. LT Tom Grafton and his platoon have been sent to root him out.

Fortune has given Grafton the most unlikely allies - an unbreakable Delta Force master sergeant and a cold-blooded CIA operative.
But High Command have badly underestimated Al Jalaad.

Safe in his stronghold, he is orchestrating a terror attack that will leave a scar on the American psyche deeper than Vietnam. All he needs is the coalition to follow their standard playbook to unleash a catastrophic chain of events.

‘Many people think it impossible for guerrillas to exist for long in the enemy’s rear. Such a belief reveals lack of comprehension of the relationship that should exist between the people and the troops. The former may be likened to water, the latter to fish who inhabit it.’
Chapter 6, “On Guerilla Warfare” Mao Zedong, 1937.

‘Sir, we just got our asses kicked. This feels like attrition warfare. We need a different strategy.’
‘You have something in mind, Grafton?’
‘What if we think of the insurgents as fish among water.’
‘You’re referring to Mao, I presume? Alright, Grafton. How do we get them out of the water?’
‘We don’t, sir. We go into the water. We make ourselves the bait.’