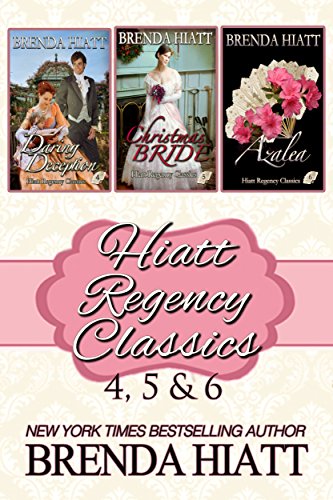 Daring Deception - The new Earl of Seabrooke needs a fortune—fast! His title came with a mountain of debt, so he's eking out a living by gaming. When a young buck cannot pay his losses and offers his sister—and her inheritance—instead, Seabrooke agrees to wed Miss Chesterton sight unseen. Appalled to learn of her brother's bargain, Frederica Chesterton infiltrates Lord Seabrooke's household as a servant to prove him a fortune hunter. But even as she gathers evidence, she finds herself losing her heart to the handsome Earl. Will revealing her true identity lead to disaster, or to a happy ending neither she nor Lord Seabrooke ever expected?

Christmas Bride - Adventurous Holly would rather spy for England like her twin brother Noel than make her London debut-until she meets the Marquess of Vandover. A whirlwind courtship, a Christmas wedding, and Holly's life seems full of promise until her inept attempt to become a heroine in her own right ends in a terrible conflict of loyalties. Now Holly must choose between her marriage and her brother's life!

Azalea - To safeguard her future, thirteen-year-old orphan Azalea is married—in name only. Her handsome new husband immediately sails back to England, but Azalea has already fallen completely in love with him. When she learns of his death at sea, she is devastated. Six years later, Azalea sails for England herself to recover her inheritance there. She is stunned to discover that Christian, her beloved, lost husband, is alive but seems to have no memory whatsoever of her or their marriage. Worse, he is betrothed! Can Azalea possibly force Christian—now Earl of Glaedon—to remember the truth before he breaks her heart again?