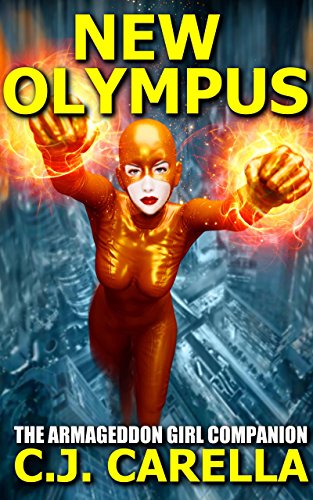 What if superheroes were real? This collection of short stories explores how history might have changed.

"Deguello" - an American volunteer in the Spanish Civil War is caught between two dueling Neolympians.

"Visionary" - in 1938, a budding super-villain threatens the city of New York and only the efforts of several legendary heroes (and one pesky reporter) can stop him.

"The Red Baron's Last Flight" - set during the last days of the Third Reich, Neo pilot Manfred Von Richthofen undertakes a desperate mission against the Allies.

"Golden Horde" - a group of young and inexperienced Neos find themselves cut off and surrounded during the First Asian War.

"Freshman Class" - a group of candidates to the Freedom Legion face a deadly threat - from within their own ranks.

"Death At A Con" - a fanboy, a secret agent and a HeroiCon 2010 Guest Of Honor face a deadly Neo with the power to kill with his mind.

In addition to the stories, New Olympus has a history of Earth Alpha, an overview of the world, and notes on using the setting for roleplaying games.