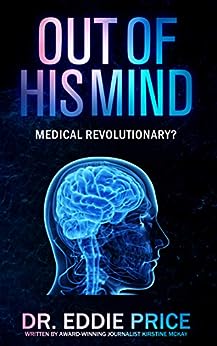 Out Of His Mind

Edward Daniel Price is a rare visionary thinker – the Nostradamus of the evolution of modern healthcare.
From early in his youth he had the capacity to ignore the many distractions of his social and cultural environs that tend to consume and blind the majority.

Edward Daniel Price is a rare visionary thinker – the Nostradamus of the evolution of modern healthcare.

From early in his youth he had the capacity to ignore the many distractions of his social and cultural environs that tend to consume and blind the majority. With great clarity he saw an energetic connection between a body's systems, between eastern and western medicine, and prophesied a future of a true health system, rather than what he called the current “disease system”.

Such was his beliefs that his published articles and subsequent books, as far back as 1973, detail concepts and theories that are only now, some 46 years later, being acknowledged and accepted on a broad scale. And yet more still await recognition. This book details that journey.

Edward Price was a trained doctor who didn't like seeing people sick. Driven by this unease, his desire to contribute to the world and through his study of medical management, he made it his mission to work out how he could improve the health of more than just the patients lining up at his practice door.

Dr Price claimed that the medical system's current perceived goal was the prevention of death. He felt that quantity of life was overrated, and led to a system trying to avoid the unavoidable whilst spending huge quantities of time, resources and money in this endeavour.

The alternative, according to the doctor, was to redefine healthcare as a system to support patients to enjoy the highest quality of life and experience a sense of well-being. He established that medical treatment results and patient ailments and recoveries were not being measured. He questioned how the system could function to its best ability if there was no understanding of whether procedures and treatments were effective or not.

More radically, Dr Price claimed that the most effective treatments, those that would actually prevent illness in the first place, were not being prescribed by doctors. He also highlighted the need for governments and health departments to employ multiple drivers and incentives for behavioural change in order for his ideas within the medical system to be embraced and achieved by practitioners. According to Dr Price, the humane side of medicine had also been neglected and the modern doctor needed to play a more caring role. He proposed that management skills would produce this humane system. He believed by implementing these concepts, not only would it radically improve the health of nations, but it would save governments and health insurers billions of dollars and increase the work satisfaction of millions of doctors and health providers worldwide.

Dr Price recognised that his ideas were revolutionary and that they would require an entire shift in the paradigm of the medical system. He was so passionate about his convictions, that his ideas would make such a positive impact on the health of the entire world, that he dedicated his entire professional life to championing them and striving to be heard.