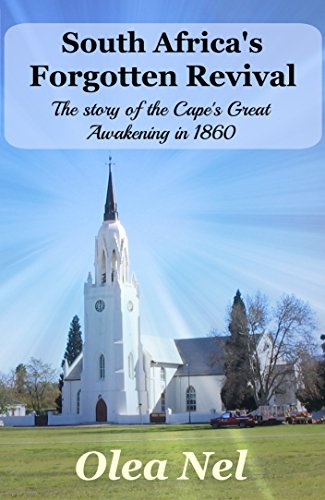 South Africa's Forgotten Revival: The Story Of The Cape Great Awakening In 1860

As the story unfolds, you will learn how the Holy Spirit moved like a wave through the Cape Colony, visiting most of its towns. Virtually overnight those who were renewed or converted became people of prayer and mission enthusiasts

This story tells of the frigid church conditions prior to revival, when there was a dire shortage of pastors and teachers, and semi-literate Afrikaners clung to their home-spun religion based on the Old Covenant. It describes how God prepared the ground by setting the precursors in place and raising up key leaders to help promote and direct the revival. They were Andrew Murray (Worcester & Wellington), Nicolaas Hofmeyr (Calvinia & Stellenbosch) and Gottlieb van der Lingen (Paarl).

While the tide of the Holy Spirit swelled gently in some towns, in others "" like Worcester "" it broke without warning. It swept through vast areas of farmland throughout the Cape and beyond, convicting Afrikaners, Coloureds and Africans. Overnight, awakened Christians became prayer warriors and mission enthusiasts.

Unfortunately, overzealousness led to disagreements regarding the boycott of Sunday trains, while a backlash from liberal pastors led to Andrew Murray having to defend the Dutch Reformed Church in legal battles in the Cape High Court and Privy Council in London.

Our story, concludes in 1875 with the victory of the Church over liberal influences, the establishment of educational centres in Stellenbosch and Wellington, and the vision for a Bible translation in Afrikaans emanating from Paarl.˃˃˃ As part and parcel of the telling you will learn:

How God in his sovereignty prepared the ground for revival.

How He drenched Montagu, Worcester, Calvinia Wellington, Stellenbosch Tulbagh, Ceres and Robertson with the first wave of the Spirit in spite of little or no communal prayer.

How God sent a special blessing to Paarl on Pentecost Sunday through an aw-inspiring vision experienced by Van der Lingen.

How Andrew Murray and Hofmeyr were victorious against the onslaught of liberal theology by wielding the sword of the Spirit, the Word of God.