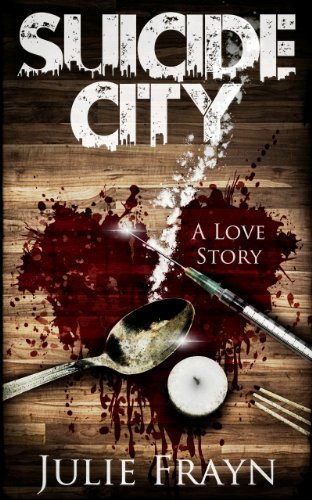 What do sixteen-year-old August, a farm girl fed up with her farm life, and seventeen-year-old Reese, a homeless boy fighting heroin addiction and the urge to cut himself, have in common? Nothing. And everything.

Sixteen-year-old August Bailey yearns for more than pig slop and cow dung. She fantasizes about an apartment in the city, not a tiny house on an Iowa farm. She dreams of new clothes and falling in love with a worthy boy. Not hand-me-downs from the second hand store in Hubble Falls, population two-and-a-half, or having her jock boyfriend grope her and push her. During another fight about makeup and boys, August's controlling mother slaps her. And August hops the next bus out of town.

She arrives in Charlesworth to discover that reality and fantasy don't mix. After a night of gunfire and propositions from old, disgusting men, she is determined to find the 'real city,' the 'real people' of her dreams. To prove to her mother, and herself, that she is the adult she claims to be.

When her money runs out, she is 'saved' by seventeen-year-old Reese, a kind boy with electric eyes and a gentleman's heart. Reese lives on the streets. Though clean for months, he battles heroin addiction and the compulsion to cut himself. Each day is a struggle to make the right choice.

August falls in love with Reese, and knows her love can save him. She breaks down his emotional walls and he tells her his secrets - of abuse and the truth about his mother's death.

As Reese's feelings for August grow, so does the realization that keeping her could ruin her life too.

WARNING: Suicide City is an edgy young adult novel. Told from the points of view of August, Reese, and August's mother, the story takes an honest and sometimes explicit look at some hard realities including teen homelessness, drug use, child abuse and prostitution. But at its heart, it is the story of first love - and the consequences of every choice made.