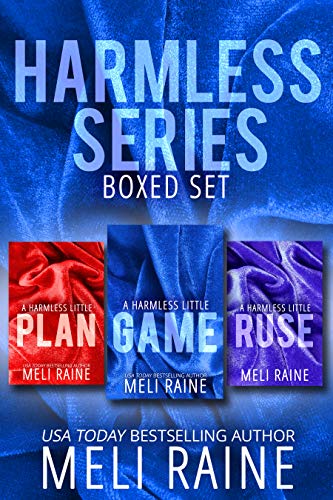 "Four years ago, presidential candidate's daughter Lindsay thought Drew betrayed her, but now he's back to prove himself. Will she let him?
The Harmless Series Boxed Set includes: Harmless Little Game, A Harmless Little Ruse, and A Harmless Little Plan. It is the complete trilogy.
If you like taut psychological suspense, a dash of political thriller and second chance romances where there seems to be no way the redeem the main characters - but there is! - then this is your series."

Four years ago, presidential candidate's daughter Lindsay thought Drew betrayed her, but now he's back to prove himself. Will she let him?

The last person Lindsay Bosworth expected to be her head of security as she left the meditation center/mental institution she'd called home for the last four years after a violent attack was Drew Foster, her ex-fiancee.

The guy who did nothing while three of his friends violated her on streaming video. Not one damn thing.

As her parents reveal the real reason she's been released, and Lindsay's life continues to be in danger, she doesn't know who to trust.

And if she gets it wrong, she's dead.

Drew proves himself, time and again, saving her from certain danger as she draws closer to him, hating herself for conflicting feelings so strong she can't deny them.

But when her attackers play a cat-and-mouse game that reignites old fury, Lindsay decides she's done being a victim.

Time to make everyone pay.

Because revenge is never harmless.