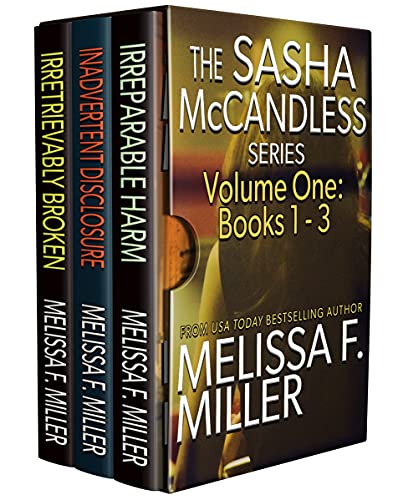 This collection features Sasha McCandless, a fierce and fearless attorney who doesn't back down in the courtroom—or in a back alley. In her first three books, she tackles a sinister plane crash, a judge's murder, and a killer targeting female lawyers.

Skillful plotting, surprising twists, and a cracking pace keep readers turning the pages in this gripping legal thriller. Downloaded by more than one million readers!

Attorney Sasha McCandless has one goal: Make partner at the best firm in town. Then a plum assignment plunges her into a world of deceit and danger.

She's tapped to defend an airline when a commercial flight crashes, killing everyone aboard. It's her big chance—high-stakes litigation for an important client. But, as she digs into the evidence, people close to the case start dying. When she discovers the crash was intentional, she teams up with a federal air marshal to prevent another disaster.

Soon, Sasha has a brand-new life goal: Stop a madman before he kills her.

It was supposed to be a routine discovery motion. It wasn't.

When Sasha travels to rural Clear Brook County for a discovery argument, the judge appoints her counsel to an angry senior citizen facing a competency hearing. Then she's attacked by a group of environmental activists who mistake her for an oil and gas industry executive. Fracking of the Marcellus Shale has left the community bitterly divided and mistrustful of outsiders.

She's eager for her appointment to end so she can leave for good. Then the town's only judge is murdered, and she can't walk away. Instead, she races to find the killer against a backdrop of secrets, backroom deals, and corruption, as the town threatens to fracture beyond repair.

“Till death do us part” takes on gruesome significance in Irretrievably Broken.

Prescott & Talbott is reeling from the murder of partner Ellen Mortenson—allegedly at the hands of her estranged husband—when a photograph of the dead woman is delivered to the law firm, her face Xed out and "ONE DOWN" scrawled across the bottom. Within days, a second partner is murdered, her husband also accused.

Sasha doesn't practice criminal defense, but her former firm asks her to represent Ellen’s husband. Owing Prescott a favor, she takes the case despite her misgivings. Soon she’s representing both of the so-called Lady Lawyer Killers. The long hours take a toll on her own nascent relationship.

That’s the least of Sasha’s troubles, though. The real killer is waging a vendetta for a past case gone wrong—and there's one more lawyer on his list.