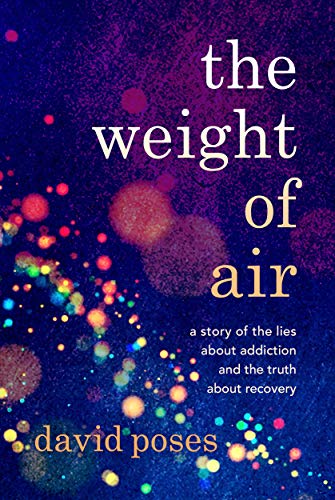 The Weight Of Air

With dark humor, David Poses recounts his struggle to overcome depression and heroin addiction. For 15 years, he went from one relapse to the next until he found an evidence-based treatment that saved his life. His story is an indictment of our failed response to the opioid crisis—and proof that success is possible.

While his wife and two-year-old daughter watched TV in the living room, David Poses was in the kitchen, measuring the distance from his index finger to his armpit. He needed to be sure he could pull the trigger with a shotgun barrel in his mouth. Twenty-six inches. Thirty-two years old. More than a decade in a double life fueled by depression and heroin.

In his groundbreaking memoir, The Weight of Air, David chronicles his struggle to overcome mental illness and addiction. By age nineteen, he'd been through medical detox, inpatient rehab, twelve-step programs, and a halfway house. He saw his drug use as a symptom of depression, but the experts insisted that addiction was the problem. Over the next thirteen years, he went from one relapse to the next, drowning in guilt, shame, and secrets, until he finally found an evidence-based treatment that not only saved his life, but helped him thrive.

With grit, humor, and brutal honesty, David's story exposes the danger in traditional recovery models: they actually increase stigma and the risk of overdose, relapse, and death. As depression and addiction rates skyrocket and overdose fatalities surge, The Weight of Air is a scathing indictment of our failed response to the opioid crisis—and proof that success is possible.