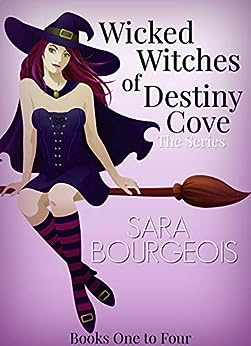 Get all four books in the Wicked Witches of Destiny Cover series in one volume. These books are filled with fun, family, and of course, murder mystery. It's one spell of a good time!
-The Witching Hour
-Mummy Knows Best
-A Howling Good Time
-Lend a Helping Hand

The Witching Hour:
Did that guinea pig just talk?

When Zoe Magnolia’s secret cupcake spell book is stolen, she knows there’s only one witch in town capable of the theft—Regina Hatterson. Zoe confronts her on Main Street in front of everyone in the small town of Destiny Cove. Of course, Regina denies it, so when she’s found dead in Zoe’s bakery the next morning, Zoe becomes the prime suspect.

Zoe’s one cupcake short of an alibi, and even her best friend, Sheriff Joe Newbury, doesn’t think she’s innocent. But Zoe’s not the only one in town who wanted Regina—a charlatan psychic—silenced for good. To clear her name, Zoe’s going to need all the help she can get.

With her guinea pig familiar, Ginger, and her neurotic mom on her side, she’s prepared to cast any spell necessary to catch the real murderer. She’s desperate to get her Cookbook of Shadows back, but will her quest lead her right into a killer’s snare?

When Zoe Magnolia’s mom, Willow, falls head over heels for the head of a traveling history exhibit, Zoe thinks that maybe her mom has a real chance at love. But, when the man turns up dead on Willow’s front lawn, the town begins to eye the Magnolias with suspicion once again.

Willow doesn’t have an alibi for the night of the murder, and things get worse for Zoe’s mom when a curse begins to follow her everywhere she goes. Zoe will need all the helps she can get clearing her mother’s name before Willow gets dropped in the clink.

With her guinea pig familiar, Ginger, at her side, Zoe will work with Willow to clear her name and solve the murder using any spells necessary. She’s determined to bring peace and quiet back to the small town of Destiny Cove, but will her quest lead her right into a killer’s snare?
A Howling Good Time:
Awoooooo!!!!

Ginger has always wanted a big, burly shifter man all her own. But, when a werewolf offers her the chance to become a shifter too, the timing couldn’t be worse.

On the night of Ginger’s first experience in human form, a dead body turns up in the woods where she and her new wolf beau were cavorting with nature.

The suspicious townsfolk of Destiny Cove want to put her and her wolfly boyfriend down. Zoe has to solve the crime and clear her familiar’s name. But, is she walking into a killer’s trap?

Lend a Helping Hand:
Joe is in hot water when he shoots an allegedly unarmed suspect. How will Zoe prove that the suspect had actually risen from the dead? It might not be that hard when other former residents of Destiny Cove start emerging from their graves.