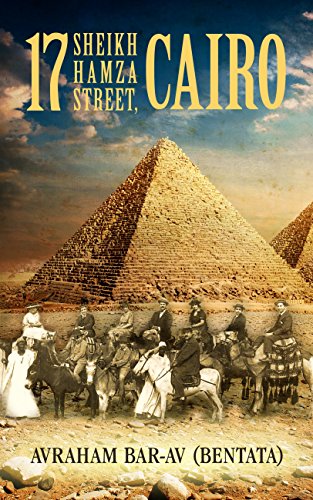 The life of a Jewish family in Cairo is dramatically affected by the rise of Arab nationalism
Through the life of the Bentata family, the reader is exposed to an unperceivable mixture of East and West that existed for a small historic moment, a vivid kaleidoscope of culture, heritage, color, scent, and flavor
A fascinating drama based on the biographic memoirs of the author, offering insight into Jewish history, North African Jewry and the history of the Middle East.

A fascinating drama based on the biographic memoirs of the author, offering invaluable insight into Jewish history, North African Jewry and the history of the Middle East.

The Jewish Bentata family settles in Cairo, Egypt, at the beginning of the 20th century. After a few decades of leading a respectful bourgeois lifestyle suited for middle-class westerners in the Orient, the illusion of belonging begins to crack. As Rommel's tanks bear down on the gates of Al Alamein, Arab nationalism raises its head.

In 1948, as the Israeli war of independence breaks out, the harassment reaches its peak: Hosni, a charming yet ruthless criminal, takes advantage of the family's political weakness. He forces himself on Suzy, the youngest daughter, threatening to harm her family if she refuses him. When he discovers that she has betrayed him by marrying an English soldier and escaping to London, he turns to her older sister, Sophie. Hosni collects evidence about Sophie's husband Zionist activity and threatens to hand it over to the authorities. While Henri is already arrested and sent to an internment camp in the desert, Sophie is given an offer that can't be refused. She may either buy his incriminating documents one by one or buy the whole lot of them together. Hosni is not picky about the payment method: "Payment can take the form of money or gold or jewelry. If you'd rather not part with your belongings, an intimate encounter is also an option."

The family's life in Egypt has hit a dead end. In the face of catastrophe, family members hurry to flee from Egypt. One part of the family escapes to Israel, others spread out to find refuge in France, Italy and Australia.