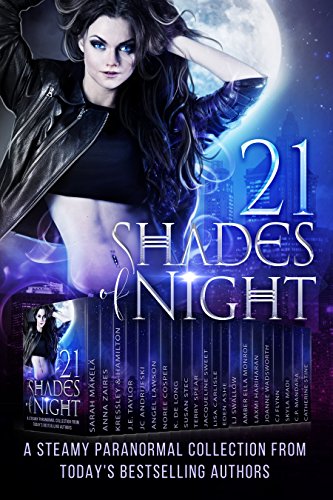 21 Shades Of Night: A Collection Of Paranormal Romance And Urban Fantasy

By: Laxmi Hariharan & Others

21 Shades of Night: A Collection of Paranormal Romance and Urban Fantasy. This boxed set will light up your night with vampires, witches, warriors, and more!

21 Shades of Night: A Collection of Paranormal Romance and Urban Fantasy. This boxed set will light up your night with vampires, witches, warriors, and more!

Sarah Makela - Beneath the Broken Moon
Carmela struggles to choose between the alpha werewolf she's destined for and the vampire she's enchanted by, but the wrong decision could lead to deadly consequences.

Anna Zaires - Close Liaisons
His people took over her planet. Now he wants her.

Kressley & Hamilton - Taken by the Beast
It's not until a missing girl is found chained up in her boss's home that this beauty realizes her romantic interest is a beast.

J.E. Taylor - Night Hawk
Sentenced to death at the hands of a demon, Naomi Hawk has a firsthand lesson in betrayal. Now, she thirsts for justice...and revenge.

JC Andrijeski - Rook
Yanked out of her life by dangerous seer and spy, Revik, Allie is thrust into an inter-species war and discovers her blood may not be as "human" as she always thought.

Angel Lawson - The Lost Queen
Nadya learns that love, power and destiny lies not in this world but the next.

Noree Cosper - A Prescription for Delirium
Gabby, a demon hunter cursed with immortality, must join forces with the descendants of Abraham Van Helsing to defeat an ancient evil plaguing a small town.

K. de Long - Reaper
When an assignment comes between Imogene and Abel, the undead assassins will be pitted against unheard of enemies- including each other.

Susan Stec - Purgatory
A myth with no name, no flesh, no sex, and no identity... Unless it wears one of you.

Terry Spear - Forbidden Love
Huntress Alena's mission: to work uncover a rogue vampire's secretive work, then terminate him. But Ephraim knows Alena is his Elizabeth from an earlier time, and he's determined to return to the past and end her curse before it's too late--again.

Jacqueline Sweet - The Wolf, the Witch, and the Wasteland
Her heart desired the pirate, but her wolf howled for the shifter prince. How could she love two men at once?

Lisa Carlisle - Knights of Stone: Mason
A forbidden romance between a gargoyle shifter and tree witch on a mystical island.

LJ Swallow - Soul Ties
Hunters sent to capture Keir's Nephilim soul never return, but Ava has no choice. Bring his soul in return for her freedom - or die trying.

Amber Ella Monroe - Wolf in Exile
A human and a wolf shifter survive exile, but will their love last when the devastating truth that brought them together is uncovered?

Laxmi Hariharan - The Many Lives of Ruby Iyer
Armed only with the sexy cop gone rogue Vik Roy, Ruby Iyer must save her city, save her friend, save her soul from total destruction.

Joanne Wadsworth - Highlander's Kiss
Tavish is a Highland warrior shifter who's traveled back through time to find his soul bound mate. Now, he encounters his greatest battle to claim her.

CJ Flynn - The Watcher's Daughter
A young woman discovers that her grandfather's ramblings of seers and the undead are not creations of his dementia, but the keys to unlocking family secrets long buried.

C.P. Mandara - Desiring Death
Vampire Vs. Huntress. When death is this sexy, resistance is futile.

Catherine Stine - Witch of the Cards
Fiera discovers she's a sea witch, but someone is out to stop her blossoming powers forever. Secrets, lies, even murder, lace this sizzling historical fantasy.