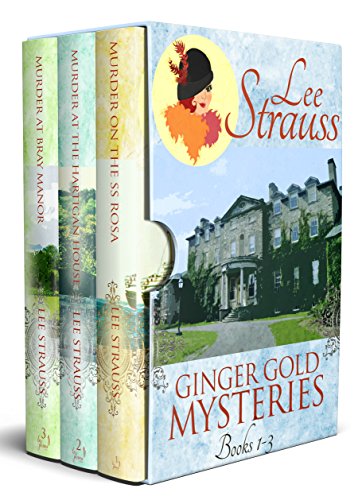 Ginger Gold, war widow and 1920s fashionista, has a head for hats and a mind for mysteries! Good thing, because there’s trouble aboard called murder.

MURDER ON THE SS ROSA

It's 1923 and young war widow fashionista Ginger Gold makes a cross-Atlantic journey with her companion Haley Higgins to London England to settle her father's estate. When the ship's captain is found dead, Ginger is only too happy to lend her assistance to the handsome Chief Inspector Basil Reed.

The SS Rosa delivers a convincing array of suspects - the wife, the mistress, a jealous crew mate. To Ginger's dismay, her name has been added to the list! With a little help from Ginger's dog Boss, Ginger and Haley navigate the clues (those wartime operative skills come in handy.) They must solve the case and clear Ginger's name before they dock--and oh, whatever shall she wear!

There's a skeleton in the attic!

After a weeklong passage over the Atlantic from Boston to Liverpool, Ginger Gold arrives at her childhood London home--Hartigan House--to find decade-old remains from some poor woman on the floor in the attic. Ginger's Boston terrier, Boss, noses out a missing phalange from under the bed.

It's a mystery that once again puts Ginger alongside the handsome Chief Inspector Basil Reed. Who is the victim? And how did she end up in Ginger's home?

Clues lead Ginger and her good friend Haley Higgins to a soirée hosted in 1913 by Ginger's late father, George Hartigan. A shadow of suspicion is cast on her father's legacy, and Ginger isn't so sure she wants to know the truth about the man she dearly loved.

Ginger decides to host another soirée, inviting the guest list from ten years previous. Before the night is over, another person is dead.

A poltergeist guilty of murder?

Ginger doesn't believe in ghosts, but is haunted nevertheless by memories of her husband and the lure of his gravesite she just can't bring herself to visit.

In order to keep Bray Manor afloat financially, Felicia and Ambrosia have opened the estate to the public for club meetings and special events. Knitters, stamp collectors and gardeners converge weekly--targets for the poltergeist that seems to find amusement in hiding small things from their owners.

Bray Manor hosts a dance to raise money for maimed soldiers who struggle with peacetime after the Great War. Felicia invites her flapper friends and her new beau, Captain Smithwick, a man Ginger has met before and definitely doesn't like.

When the dance ends with the discovery of a body, Ambrosia is certain the poltergeist is to blame, but Ginger is quite sure the murderer is made of flesh and blood.