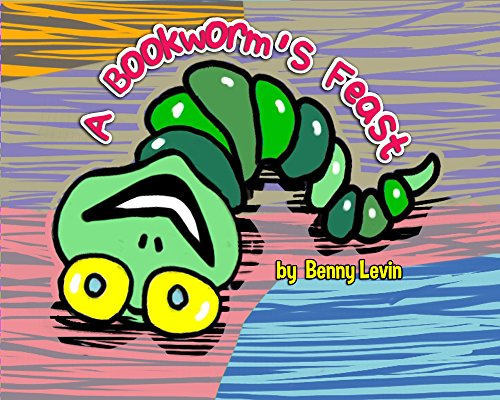 Book worms love to eat the tasty printed letters of a book. One sat upon the letter B and began to read and chew until the B became the letter R. She then nibbled it down to P, munched it to F, bit it to I, and then just a dot to end a sentence.

Follow a delightful little worm as she reads, munches, and transforms the letters of a book

Book worms love to eat the printed letters of a book.

They are very tasty. She crawled over and sat upon the letter B and began to chew, eating and eating until the B became a letter R.

She sat down to rest and chewed with pleasure. She continued to eat,

biting further into the letter until it became a letter P.

The worm was full, so she lay down to rest. Then she went on

eating and did not stop until the P became an F.With little left to eat at the end, she looks toward the future

She ate and read, read and ate, until the F became the letter I.

As she went on eating, she thought to herself "what else is left?" As she turned it into just a dot - a period at the end of a sentence.

As night came, the worm asked herself what the future holds.

Will computer worms work the same way, enjoying as does she, reading and eating?