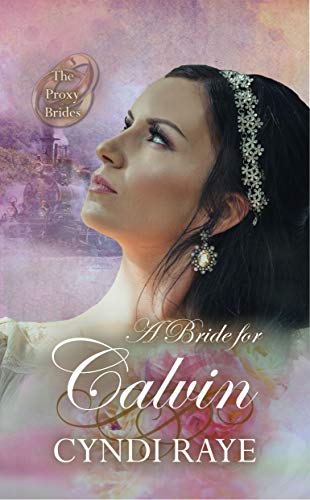 A Bride For Calvin

A successful rancher - A woman desperate to save her sister - A man determined to destroy everything.

A successful rancher - A woman desperate to save her sister - A man determined to destroy everything.

Theresa's family is about to lose their home until a rich cattle rancher strikes a bargain with her. If she agrees to become a proxy bride, her sickly sister will be sent to Glenwood Springs, where she is able to get the care she needs. Theresa will do anything for her sister, even reluctantly agree to spy on her proxy husband.

What she never expects is to fall in love with the man she is deceiving.

Calvin Morris, adopted son of one of the largest cattle ranches in Texas, leaves home as a young man to make his own way. Finally, years later, he becomes the proud owner of a cattle ranch in Montana Territory. A marriage by proxy is part of the plan.

Someone is trying to box him in by buying the land around his property. When he learns his wife's sister needs the healing waters of the hot springs on one of the parcels of land, he is more determined than ever to make it his own. He has no idea his wife has been lying to him. Will he be able to forgive her when he finds out?

The folks of Pistol Ridge are willing to find a way to stop any outsider from taking the land that Cal wants. Can they save the ranch in time?

Will her sister's life be in peril if Theresa admits what she's done?