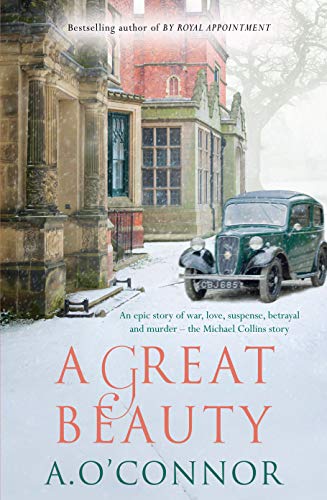 An epic story of war, love, suspense, betrayal and murder – the Michael Collins story.
It is 1920 and, as the War of Independence rages throughout Ireland, Michael Collins is the most wanted man in the British Empire.

It is 1920 and, as the War of Independence rages throughout Ireland, Michael Collins is the most wanted man in the British Empire. He lives a life in hiding, conducting guerrilla warfare, outsmarting the authorities, a figure of mystery and intrigue. Very few know even what he looks like. He occasionally finds rest and comfort with the family of Kitty Kiernan, his best friend’s sweetheart. Then Michael finds himself falling in love with the complex and enigmatic Kitty.

Lady Hazel Lavery, wife of famous artist Sir John Lavery, is considered the most beautiful and charming society hostess in London. An American of Irish descent, haunted by a tragic past, she sets out to use her friendships with men like Winston Churchill to bring peace to Ireland.

When Michael, recently engaged to Kitty, arrives in London as part of the Irish peace delegation, he finds himself the centre of intense public fascination. Hazel Lavery takes Michael under her wing and navigates him through London high society. They form a close bond and soon are engulfed in rumours of an affair and accusations that Michael has been seduced by the glamour of London and by Hazel. Kitty all but despairs at the situation but is determined to fight for him.

After the infamous Anglo-Irish Treaty, Ireland veers towards civil war. As Michael, Hazel and Kitty arrive in Dublin that fateful week in August 1922,the war is at its zenith – and this love triangle is about to implode with devastating results.