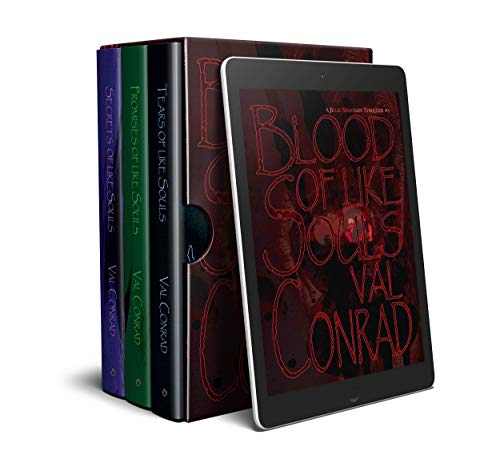 "Novelist Val Conrad’s stripped down style works well in this otherwise complex medical thriller series.". Julie Madigan's career with the New Mexico State Police ended in a puddle of blood on the floor when she survived having her throat cut.

Blood of Like Souls
Julie Madigan's career with the New Mexico State Police ended in the puddle of blood on the floor when she survived having her throat cut. But a year of recovery left her desperate to hide the scars and to escape her past. She moved to Michigan, away from friends and coworkers who knew her secrets. Now a Medical Examiner Investigator, Julie Madigan plays by the rules, but the rules change when a killer sends her clues and evidence about two victims, taunting her with his unusual methods of murder, pulling her into his twisted game, targeting those she cares about. His goal - to prove Julie will kill like he does. While trying to identify him, Julie discovers the monster has been closer to her than she imagined, leaving her in a race to save the victims he's selected, forcing her to choose who lives and who dies.

Tears of Like Souls
Medical Examiner Investigator Julie Madigan might have survived her half-brother's brutal crime spree, but the emotional wounds left by Anthony Bock's evil run deep. She begins a walk down the path to healing with the one man who's always loved her - Zach Samualson, who works for the Drug Enforcement Agency. They begin to establish a new life together in Washington - until he reveals a secret of his own. Julie's torn between trusting him and running from her inner demons and the one question that's haunted her since she was sixteen -did Bock make her kill her father?

Promises of Like Souls
After a small wedding to Zach in Albuquerque, Julie Madigan, now Julie Samualson, goes back to Michigan to pack and say goodbye to her friends and coworkers before moving to the log cabin Zach had built for them prior to Julie's yes to marriage. But her arrival in paradise was without her groom, who had stayed behind in New Mexico to finish an assignment with his DEA unit while awaiting a transfer. Zach, however, faces a startling surprise that will change both their lives completely - that he is the father of a teenage daughter, whose mother was kidnapped by one of Zach's ex-partners who had turned against the agency and his partners. By a man with a single goal - to destroy Zach and all he holds precious.

Secrets of Like Souls
On her way down the stairs, Julie Samualson falls and injures her ankle, disrupting more than her family. She limps on to a Portland hospital to begin an investigation into the burns suffered by the sister of one of the sheriff's dispatchers - burns that don't appear to have been sustained in a fall. Then the wife of a fellow deputy goes missing, and the van found near the Columbia River. On crutches, Julie can only help process evidence. Meanwhile, Amber, her stepdaughter, asks if they can continue searching for clues about the bag they found on a trail ride - the contents include an old library card and piece of tattooed human skin made into leather. But when the three different cases begin to connect and threats get closer to her loved ones, Julie's world begins to unravel.