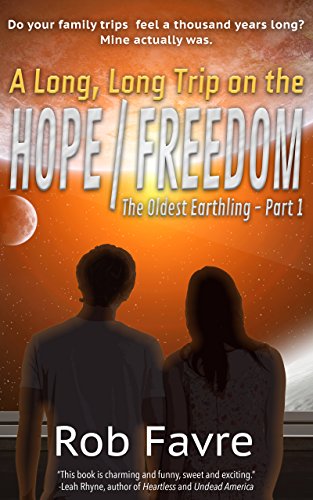 A Long, Long Trip on the Hope/Freedom

The Hope/Freedom. A huge vessel on a thousand-year voyage across deep space to start the first human colony outside the Solar system. It’s the greatest adventure ever.And Tom just wishes it wasn't so boring.

The Hope/Freedom. A marvel of engineering, the culmination of decades of research and years of construction, she's on a thousand-year voyage across deep space to start the first human colony outside the Solar system. It's the greatest adventure in all of history.

And Tom just wishes it wasn't so boring.

He's pretty sure his parents didn't bring him along to ruin his life intentionally; that's just the way it's worked out. There's not much to do apart from fixing and cleaning things. The food is bland when it's not just disgusting. And having to spend years at a time frozen inside a metal tube in dreamless sleep, well, that's more sleep than even a teenager wants.

But when Tom wakes up from one of his extra-long naps, he quickly sees that thing are wrong. The ship is dirty. The air smells like goats. Nobody he knows is around, but that doesn't mean he's alone.

Oh, and it isn't long before Tom uncovers a problem that could spell doom for himself, his sleeping parents, and everyone else on the Hope/Freedom. It's almost enough to make him miss homework.