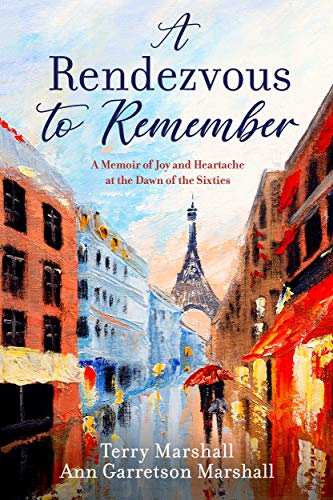 A Rendezvous To Remember

The true story of a soldier, a pacifist, and the woman who loved them both. A funny, heartbreaking, and delightfully uncensored coming-of-age memoir.

The true story of a soldier, a pacifist, and the woman who loved them both

In the early 1960s, Ann Garretson sparks an airmail romance with Lieutenant Jack Sigg, a West Point grad and tank commander on the German-Czech border. Ann and Jack’s correspondence heats up, and they hatch a rendezvous in Europe for the summer of 1964 to seal their budding love. A match for the ages.

Not so fast. Ann’s best friend in college, Terry Marshall, helps her plan the escapade, but in the weeks leading up to her trip, they realize they are more than just friends.

In June, Terry bids her a wistful goodbye. One lonely month later, he decides he can’t live without her. As Jack takes Ann on a whirlwind “grand tour” in his Corvette Sting Ray, she receives Terry’s marriage proposal—by mail. His letter throws all three of their lives into turmoil.

Ann is in love with two men who couldn’t be more different. Jack offers the military life Ann grew up with. Terry is a fiery conscientious objector who plans to join the Peace Corps—unless the draft board intervenes and sends him to jail. Caught between the old mores and winds of change, Ann must make an agonizing choice.

A Rendezvous to Remember presents firsthand accounts by the two who eventually married, enriched by letters from the rival, whose path led him elsewhere. Provocative and delightfully uncensored, this coming-of-age memoir is a tribute to the enduring power of love and family.