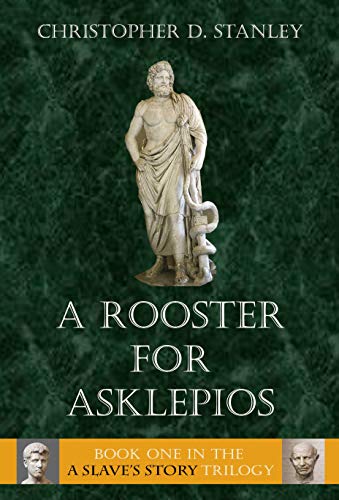 A Rooster For Asklepios

A slave without a past. A master without a future. A journey of discovery that will forever change both men.
The ancient world comes alive in this vivid and engaging fiction trilogy by an expert on Roman social and religious history. Learn more at https://www.aslavesstory.com!

A slave without a past. A master without a future. A journey of discovery that will forever change the lives of both men. The ancient world comes alive in this vivid and engaging trilogy by an expert on Roman social history.

What if you suddenly discovered that you were not who you thought you were—that your true family history had been hidden from you since birth? What if the truth about your origins would cause others to despise you? What if the man who had arranged the deception was seriously ill and needed your help? What if you were a slave and that man held your life in his hands—and you his? These are some of the questions explored in the first two volumes of the new historical trilogy, A Slave’s Story.

The story centers on a slave named Marcus who manages the business affairs of a wealthy Roman citizen in central Asia Minor in the first century AD. The first volume, A Rooster for Asklepios, narrates his eventful journey to a famous healing center in western Turkey in response to a dream in which the god Asklepios appears to promise that his master will be cured there of a nagging illness. The second volume, A Bull for Pluto, relates the aftermath of this journey as Marcus struggles with newly revealed secrets about his ancestry and his master comes to terms with his mortality.

Along the way, both men encounter people and ideas that undermine everything that they have ever believed about themselves, one another, and the world around them. Societal norms are challenged, personal loyalties tested, and identities transformed in this engaging story that brings to life a unique corner of the Roman world that has been neglected by previous storytellers.

Readers who enjoy complex stories about flawed characters, epic journeys, and characters who struggle with their identities and commitments, including their views of religion

Readers who want to know more about the social and religious world of early Judaism and Christianity (including Roman religion and anti-semitism); how Greeks and Romans dealt with sickness and healing (medicine, miracle, and magic); and what life was like at specific Roman archaeological sites in Turkey (Ephesus, Pergamum, Hierapolis, Antioch, etc.).