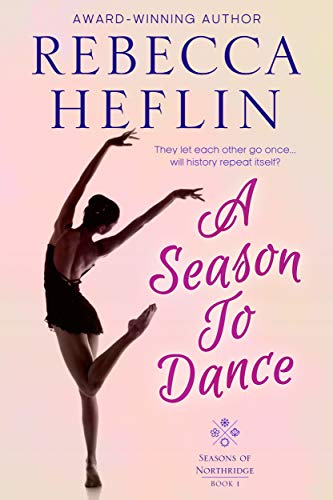 A Season To Dance

Injured and in mourning, famed dancer, Olivia James, returns to small-town Georgia to set her mother’s estate in order, but seeing Zach Ryder, her high school sweetheart, stirs up old heartache. Will they give in to their rekindled desire and seize a second chance at happiness?

Olivia James and Zach Ryder were high school sweethearts, but at age eighteen, she left small-town Georgia for the bright lights and satin pointe shoes of Chicago's Joffrey Ballet. Seventeen years later, Olivia's come home for her mother's funeral, nursing an injury that could likely end her meteoric dance career. Being back home stirs up old heartache, and seeing Zach again is not on her to-do list. Her best bet is get in, get out—a week at most. Then she'll return to Chicago to rehabilitate her injury and salvage her career. But best laid plans often go astray . . .

Zach has never really recovered from Olivia's departure, even though he always knew she was destined for fame, while he was destined for small-town life. Now Olivia's back and he's determined to protect his heart. But when he learns she's staying in town longer than originally planned, Zach knows they are going to have to face the past to move on. He's just not prepared for the beautiful woman she's become or the effect she still has on his heart.

Small towns being what they are, Zach and Olivia are constantly thrown into one another's paths, and it soon becomes apparent they still love each other. Will they give in to their rekindled desire and seize a second chance at happiness?