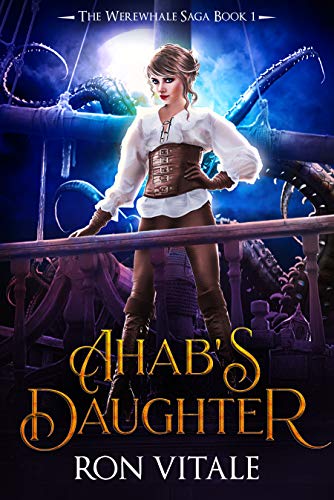 Ahab’s Daughter is the rollicking first novel in The Werewhale Saga, a series of fantasy adventures. If you like tenacious heroines, supernatural twists, and high seas suspense, then you’ll love Ron Vitale’s entertaining follow-up to Herman Melville’s literary classic.

A sea curse and dark magic. A family that can’t stay clear of the water…
Join Morgan as she sets sail to break a family curse on the Island of Nightmares.

Set in the 1850s, Morgan refuses to let her twin brother suffer the same fate as their whale-obsessed father, Captain Ahab. Despite her efforts to keep Nathan on dry land, her brother can’t resist the siren song of the sea and rumors of untold treasures on the Island of Nightmares…

Before Nathan can drop anchor and find his bounty, his crew encounters an ominous force. He’s convinced the creature is somehow connected to his father’s past and that one of his crew has been bitten. Could Nathan actually be on the run from a werewhale?

As the dark island fast approaches, Nathan’s adventure could end in a watery grave. It’s up to Morgan and her father’s old crewmate Ishmael to save Nathan’s life. But can she possibly change the mind of a man with the same stubborn streak as Captain Ahab?