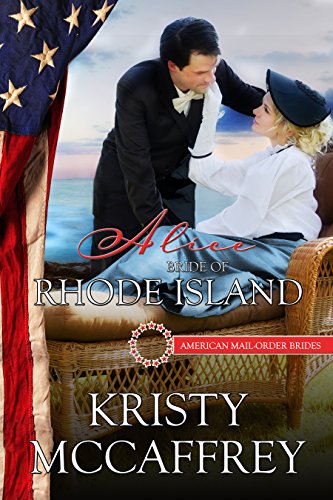 Alice Endicott travels to Rhode Island to meet her betrothed, but a mix-up leaves her married to his brother. James Martel seeks retribution against the man who ruined his father and his new bride holds the key. Can they find love amidst the secrets and betrayals?

Fleeing her stepfather and an arranged marriage in Newport, Alice Endicott finds work as a seamstress at the Brown Textile Mill near Boston. When a devastating fire destroys the factory, she and all the girls face dire unemployment circumstances. But hope arrives when their manager, Roberta McDaniel, shares the Grooms' Gazette with them. Each woman will choose a husband and become a mail-order bride. As Alice's friends—Lottie, Leora, Judith, Beth, Lessie and Josie—embrace the idea, she too becomes caught up in the excitement of a grand new adventure.

When fisherman Frank Martel contacts her, Alice can't pass up the opportunity to return to Rhode Island despite her stepfather's presence. Upon arriving at the train station in Tiverton, however, Frank neglects to meet her.

James Martel is shocked to find a woman at the rail depot claiming to be his brother's fiancée. Even more surprising is her connection to a man who ruined James' father years before. When Frank confesses that he can no longer wed Alice, James steps forward to fill the role since the beautiful young woman holds the key to avenging the Martel name.

Can Alice convince her new husband that their marriage is worth saving once she discovers his subterfuge? And will James learn that love is more important than revenge?