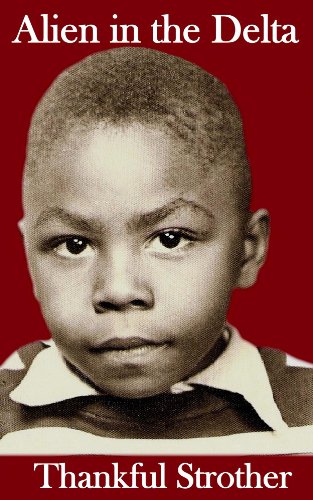 Alien In The Delta

Grandfather shot the man as he opened the gate to the front yard. The man died on the spot. After killing the man, my grandfather went into hiding for seven years. This event was the legacy left to my father by his father. Would what happened thirty years before my birth have an impact on my life?

Grandfather shot the man as he opened the gate to the front yard. The man died on the spot. After killing the man, my grandfather went into hiding for seven years. This event was the legacy left to my father by his father. Would what happened thirty years before my birth have an impact on my life?

Alien in the Delta's author Thankful Strother takes you on a journey that highlights the life experiences of a boy from the age of six through manhood. He grew up on the Mississippi River in the Arkansas Delta, but felt out-of-place in that environment. In his home town prejudice and inequality were practice openly. His escape from the Delta was not realized until he went abroad. You go with him on his adventures in the rural south and throughout Europe. Thankful Strother spent four years in the United States Air Force stationed in Germany where he learned to speak German and met his future wife. He settles in Detroit starts a family and buys their first house. He goes to work in the automotive industry, learns to program computers, enters the corporate world and becomes a successful manager and real estate investor. He shares with you a variety of emotions including fear, sadness, happiness, and amusement. Alien in the Delta is a memoir about a poor boy that discovered how to overcome life's obstacles at every turn to become successful.

An experience that stands out in my mind happened in a German restaurant. We were young men from the United States, living in Europe without a lot of exposure. Our knowledge of culture limited because we had not seen or done many things before coming to Germany.

Bobby and I went to a German restaurant to eat dinner. We had gone there once before, and this time we brought our friend, Shorty with us. The hostess seated us and gave us the menus. While Shorty looked over the menu, Bobby and I had already decided what we wanted to order, so we placed our menus on the table. Noticing this, Shorty said that he would have whatever we were ordering.

This restaurant was very upscale. Each table had a white tablecloth on it with a beautiful flower arrangement in the center. The settings consisted of plates, silverware, glasses, and white cloth napkins. When the waitress came to take our order, we all ordered the chicken dinner, just as before when Bobby and I had eaten there. Each dinner included a large piece of chicken, baked potato, salad, bread roll, and dessert. Except for the dessert, all the dinner items were serve to us at the same time. When we finished eating our dinner, our plates were removed.

The waitress returned to our table carrying several small plates and bowls half filled with water with a lemon slice floating on top. She placed the small plates in front of us and set a bowl on each small plate. I asked Bobby if he wanted my lemon soup. He had enjoyed it so much the last time we were at the restaurant.

Shorty began to laugh and said, "Let me get this straight. Are you telling me that Bobby ate the contents of that bowl the last time you were here?" I told Shorty that not only did he eat his soup, he also ate my serving. I described how Bobby took his bread and tore it into little pieces and placed them in the soup and used a spoon to finish eating his soup.

At that point Shorty had started to convulse from laughing. We laughed along with Shorty, not knowing why he was laughing. When Shorty regained his composure, he told us that we were really ignorant country people. He explained that the bowls were call finger bowls because they were use to dip your fingers into after eating chicken to remove the grease. Then the bowls would be removed, and our waitress would bring us dessert and place it on the small plates.

Well, we did not know anything about finger bowls in Arkansas and Mississippi, where Bobby and I came from. We continued laughing after finding out that Bobby had eaten finger bowl water, thinking it was soup. That was the last time we ate at that place