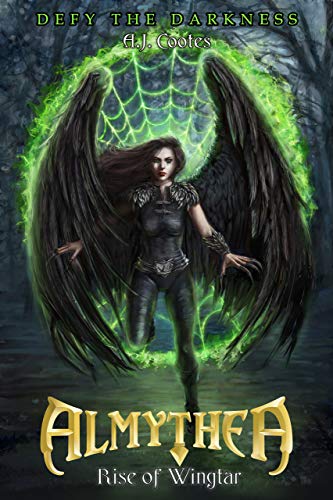 In the Chronicles of Almythea, Australian author A.J. Cootes builds on the timeless formula of blockbusting storytelling in the ilk of Star Wars, Lord of the Rings, Avatar and The Stormlight Archive.

Once in every thousand years, a hero is born who is destined to save the world.

The inhabitants of Almytheans, are forced to act as slaves, mining rare refractive crystals for the malevolent Lost One. The Almytheans are comprised of both humanoid and non-humanoid species, many having been brought to Almythea by the Lost One's reptilian, thug-like armies of Latchers. They live simple, oppressed lives as most have had their memories wiped before commencing their enslaved existence. However, they still possess an abiding belief that their prophesized savior, known as The Astra, will one day rescue them.

Banished from the community for a crime he did not commit, as Little Hawk approaches his twenty-first birthday a mysterious shaman warrior, Grey Paw, rescues him from depression, self-doubt and the deadly addictive bittercups in the Badlands before preparing him for a secret tournament. The winner will be named The Astra and sent on a quest to find the fabled Arrow of Truth, the only weapon capable of ending the Lost One's rule. All Almytheans expect the self-serving and duplicitous Gyeder to be named The Astra. This honor and responsibility includes the hand of a headstrong, capable young woman (and last of the pure blood Accipitridae race) named Broken Arrows, the woman Little Hawk has secretly loved.

It's a race against time. Little Hawk feels the weight of his destiny to destroy the Lost One, his reptilian Latcher army and his curiously beautiful yet sinister lieutenant Raven Weaver, before they destroy him. With the help of Grey Paw, his best friend, the wise-cracking Laughing Eyes, and a curious pixie-like, mess-up creature called a fleaf, Little Hawk must not only save Almythea but also rescue Broken Arrows from a terrible fate.