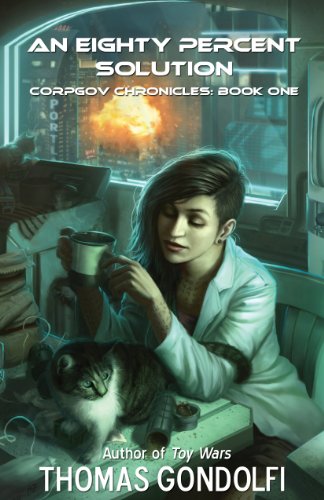 Cyberpunk yarn where megacorps rule over even the governments. Sonya, a witch, runs the Green Action Militia, a guerrilla band dedicated to overthrowing their tyrannical rule. In response to the GAM's bombings and assassinations, the megacorps unleash a bio weapon through an unwitting source.

Mega corporations and terrorism collide in this cyberpunk thriller on a future earth where owning a pet is a capital offense, paying protection money to the police is as inevitable as death and taxes, and using a designer bioweapon to eliminate a nuisance isn't given a second thought.

CEO Nanogate works closely with other mega-corporate magnates to control everything in their path. Together they suborn governments, police, and anything else barring their way to greater profits.

As the cool, enigmatic leader of the Green action Militia, Sonya drives the organization's agenda through murder and destruction among the corporate elite. The higher the body count the more their cause earns credibility.

Tony Sammis, mid-level functionary, sinks further and further into the apathy of his own dreary existence as a cog in the great commercial machine. Without a say in the matter, his life will form the intersection of a grand conflict that could change or destroy the life of every sentient being in the Sol system. As flotsam in a flood, Tony must deal with greed, terrorism, corrupt police, pathological killers, and biological warfare in his attempt to save himself and his society.