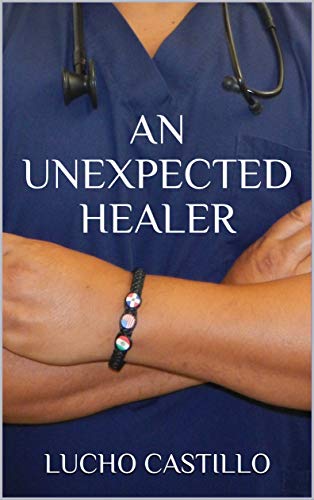 An Unexpected Healer is a work of fiction. It is a medical drama and love story told with a male nurses voice and a Latinx heart.

Carlos Taino was living a simple life in Washington Heights, New York, until he fell in love with Amy Del Torro. In a desperate attempt to win the respect of her wealthy, Mexican-American family, he reluctantly enrolled in nursing school. After barely graduating, he spent the next five years assessing some of the wildest, homebound people in New York City.

After Carlos loses his job, Amy tells him she’s pregnant and he’s forced to leave his beloved New York, and his family, for Los Angeles. Carlos finds himself immersed in a Latino culture he does not recognize, and overwhelmed by his first hospital job, in a predominately woman’s world. In the meanwhile, Carlos realizes that he may have to abandon his dream of becoming a writer, which he hoped was going to be his escape from nursing.

Carlos struggles and grows from the stress of working with desperate patients, irritated doctors and over-worked staff. Join him as an act of heroism earns him an invitation to the hospital’s elite Trauma Department. It’s a promotion he does not want, but his wife and overbearing in-laws have other plans. In the Trauma ICU, he witnesses the horrors of suicides, stabbings and shootings, even as his dreams of publication fade.

Unfortunately, every nurse’s worst nightmare comes true, when his family is brought to the ER after a massive car crash. Will Carlos learn the meaning of mercy, love and destiny trying to save what’s left of his family?

An Unexpected Healer is part medical drama, part love story. It’s message is that overcoming disappointments, and facing challenges, is sometimes necessary to make us who we need to be.