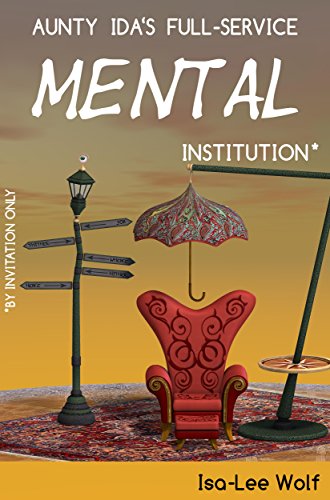 Judge Margaret Hamerton-Simpary didn’t plan on flipping out during a nationally televised trial. She certainly didn’t plan on Aunty Ida and her nonsensical machines.
But getting her job back?
That’s a plan. And it’s a big one.

You know that case on LawTV? The one where the judge lost it on national television?

Yes, that was Margaret.

But Ida - who insists you call her "Aunty Ida," if you want to (no one ever seems to want to) - is there to help. That Margaret doesn't want her help doesn't dampen Ida's delight in playing with her mind-altering toys and calling it therapy.

Besides, the courtroom thing was only a big deal because of the cameras. OK, so it was Margaret's courtroom, and yes, she was hearing the biggest case of her career, and yes, the LawTV commentators were all over it, but these things always get sensationalized. The restraining order her husband got against her was only temporary.

So she's suspended. It's nothing she can't fix.

Sure, Margaret has no idea who this Ida person is, but if she can get her to sign a form, she'll be back on the bench in no time. Unfortunately for Margaret, Aunty Ida knows exactly who Margaret is. And Margaret isn't going anywhere.

With relentless optimism, Ida dives into curing Margaret of her problems, one odd treatment at a time. But Margaret knows there's nothing wrong with her.

She was set up, and she's determined to prove it.