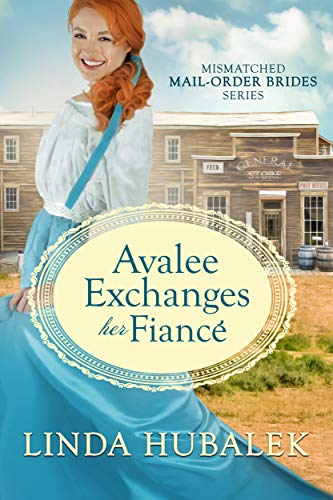 Will Avalee exchange her fake fiancé for a real one?
It’s 1892, almost twenty years after the first mail-order brides found love in Clear Creek, Kansas in the Brides with Grit Series.

Will Avalee exchange her fake fiancé for a real one?

The older members of the Clear Creek church women’s group, informally known as the Peashooter Society, decide to help the unattached women in town obtain husbands because there are more women in town than men.

Avalee Paulson, the third daughter in the Brides with Grit series book, Helen Heals a Hotelier, is Dr. Pansy Reagan’s physician’s assistant. She’s independent, determined not to have bad luck in love as he mother did.

The Peashooter Society decides Avalee needs a husband to complete her life, even if she’s happy with her friends and work. Avalee pretends she has a fiancé to ward off their attempts at matchmaking, and a man who’s been giving her unwanted attention.

Gordon Miller, along with his two brothers and their three friends, left New York City on an orphan train when he was seven years old. Now mustered out of the army, the group get the chance to live and work together in a small community, thanks to the plan of the Peashooter Society.

Gordon’s appointed job is to work with the Taylors, an older couple, as they try to decide to down scale or retire from their mercantile store. Not only does this frustrate Gordon, it makes him question if he wants to stay in town or venture out on his own. The thing that keeps Gordon in Clear Creek though, is Avalee Paulson, the doctor’s assistant who is fighting off the attention of an unwanted suiter.

Gordon offers to be Avalee’s fiancé to get the man to leave Avalee alone, but then feelings develop between the couple.