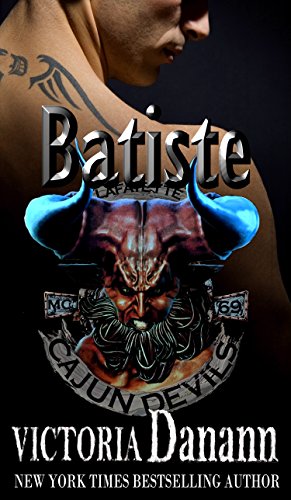 Angelique Bellefeuille, is sent to an allied club for protection, but her childhood friend is not the cute boy she remembers. He's large, in charge and menacing.

Take a journey into the exotic culture of bayou country in Louisiana's Lafayette and Acadia parishes. Cajun beauty, Angelique Bellefeuille, has had enough of bikers and their bullshit. Being put in danger because of her father's motorcycle club makes that conclusion rock hard solid.

When she's sent to an allied club for protection, she's reunited with her childhood friend, Just Batiste. Only he's not the cute, fun, adventurous kid she remembers. He's large and in charge. And the sexy, menacing fire starter mounts a full frontal assault on her vow to stay away from the very fire he embodies.

To prove that things can never be simple, add to the equation the interest of Dev Merit, who's on loan from the SSMC to get a joint venture off the ground.

Angel knows a lot of women might fantasize about being pursued by two men like Just Batiste and Dev Merit. But that's because they aren't acquainted with the pitfalls inherent in relationships with bikers. She's having none of it.

The last thing the Devils' president needs is a woman to interfere with the mission giving his life purpose. But Fate has her own sense of timing. Angel is distraction and vexation walking around in the form of a little girl grown into mind numbing, curvy, blue-eyed swamp vixen who can't seem to decide if she's going to jump his way or toward the SSMC pretty boy who's equally exasperating in his own way.

Just when Batiste thinks he can't get more frustrated with the little troublemaker, she's abducted by the very people he's supposed to be protecting her from.