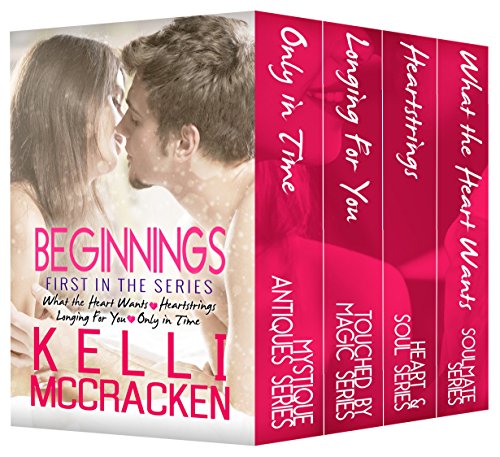 From rock stars and musicians to soul-bound psychics, this collection of contemporary and paranormal romance novels will leave you breathless.

From rock stars and musicians to soul-bound psychics, this collection of contemporary and paranormal romance novels will leave you breathless.

1) What the Heart Wants (Soulmate 1)
A recurrent dream. A fated encounter. A destiny neither can deny.

Heaven Lewis needs a break—from college, from relationships, from her life. After arriving in L.A., her vacation plans are thwarted by chaos. Encountering a celebrity wasn't on her to-do list. Neither is dating him. But the more time they spend together, the more his soul speaks to hers.

Dylan McBride is desperate to find the girl haunting his dreams. When he meets Heaven, her presence calls to his soul, awakening a desire so primal, he struggles to control it. A simple glance, a tender touch, even the sound of her voice electrifies his body. As much as he craves her, there’s more than lust drawing them together. Dylan can sense Heaven’s emotions.

As the mysterious connection between them deepens, Dylan uncovers a secret that proves his and Heaven’s destinies intertwine. Yet telling her the truth won’t be easy. Outside influences threaten to keep them apart, and a horrific encounter puts Heaven in danger. Dylan must find the courage to tell her the truth or risk losing the woman whose fate is linked to his.

2) Heartstrings (Heart & Soul 1)
Forgetting the past isn’t always a choice.

Jo Hayes is desperate for answers. After waking from a coma, she faces a harsh reality. Amnesia has stolen six years of her life. The only thing keeping her sane is her brother, Brighton, who vows to protect her at all cost.

As fear and confusion dominate Jo, she struggles to regain her memories. Pieces slowly emerge once she meets the mysterious Adam Hart. Something about him strikes a nerve she can’t ignore, and the more she’s with him, the harder she fights to remember.

While a series of flashbacks bring Jo closer to the truth, they leave her physically drained. If her memories don’t return naturally, the truth may destroy more than her mind. It may be the one thing that kills her.

3) Longing for You (Touched by Magic 1)
Redemption. Seduction. Love wasn't part of the plan.

Theo McCabe is on the road to fame. Next stop, hometown hell, Savannah, Georgia. After a wicked fight with his domineering father forced him to leave town, he vowed to never return. Six years later, he's persuaded back when his brother agrees to produce Theo's first album.

Hellbent on avoiding his past, Theo submerges himself in work until a last-minute gig has him crossing paths with Cassie Clarke, the one girl he never had the courage to ask out. She's still the brazen flirt he remembers from high school, and this time, Theo has the guts to go after what we wants.

One night with Cassie will satisfy Theo's desire, but he can't afford the type of distraction her body provides. If he gives in, he'll risk more than his career. He'll expose his heart to the one woman who could break it.

4) Only in Time (Mystique Antiques)
He lied to protect her. She left to forget him. Neither expected the past to change their future.

Jonah McCabe has no time for love. As a prestigious L.A. record producer, his long days and short nights keep his schedule full and his bed empty. But when his current project leads him back home, Jonah is haunted by memories of Ally.

Ally Jacobs is getting the promotion of a lifetime. The only downfall is returning to her hometown and the past she's struggled to forget. When she runs into Jonah, the humiliation over his previous rejection comes barreling back.

As a series of mishaps bring them closer together, Ally must decide if Jonah is worth getting her heart broken again. And Jonah must reveal a painful truth or walk away from Ally forever.