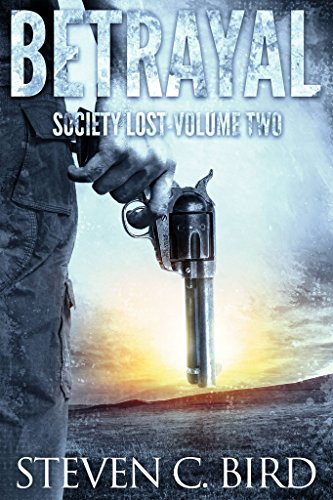 After leaving Spence and the rescued girls with Jӧrgen and the remainder of his group, former Sheriff Jessie Townsend traveled the new and unforgiving world alone and on foot, continuing his quest to find his sister.

After leaving Spence and the rescued girls with Jӧrgen and the remainder of his group, former Sheriff Jessie Townsend traveled the new and unforgiving world alone and on foot, continuing his quest to find his sister.

Still suffering tremendously from his tragic loss, Jessie walked the Earth as a prisoner of his own thoughts. Armed with his trusty old Colt Single Action Army pistol and an AR-10 platform rifle, Jessie was ready for whatever violence that may come his way. Although each of his days had a purpose, continuing on his quest that may or may not end before his death, Jessie felt a certain level of emotional numbness that only being alone could provide him.

Jessie found solitude in his empty heart—solitude that he felt he desperately needed—but not a day went by when he didn’t think back to those whom he had encountered along the way. In this mad and twisted world, devoid of law, order, and the civility that people around the world had come to expect as the norm prior to the great collapse, Jessie knew that there were still good people out there. Good people who would have to face the evil that this lawless and dangerous new world had spawned once the walls of society came crumbling down around them.

As his travels took him east past the Rocky Mountains and through the desert southwest, Jessie encountered the scene of a recent ambush near Fort Sumner, New Mexico. Appearing to him that children may have been involved, he could not simply pass on by without investigating further. Putting his former tactical and law-enforcement skills to use, he soon became both the hunter and the hunted as he resolved to impose justice on those who would betray others in their own quest for power. What his enemies would soon come to realize, however, is that you should never underestimate a man with nothing to lose—especially a man with an unquenched thirst for vengeance—in a society lost.