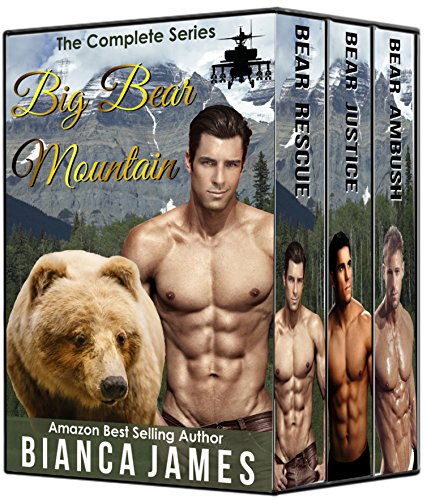 Bear Rescue
High Mountain Ranger, Jarrad, isn't looking for a mate. Women are a complete mystery to him. Every time he opens his mouth to speak to one, it leads to a big misunderstanding. Or a huge argument.
But his bear gets other ideas after they rescue a feisty and spirited city girl from the slopes of the treacherous and unforgiving Big Bear Mountain.
Curvy, junior executive, Elle needs to get away from the city in a hurry. A big hurry. Finding out her boss is a money laundering crook doesn't leave her with too many options, especially when the cartel find out how much she knows.
They're coming after her and a quick getaway into the mountains seems like a pretty good plan.
When her car is hanging over the edge of a cliff, though - not so much.

Bear Justice
Big Bear Mountain erupts when a blazing female PI clashes with the hot-as-sin town sheriff.
Medically discharged after being injured during a covert operation, Jack Raven tries to adjust to post army life as the Sheriff of Big Bear Mountain. His bear is quite at home, but in his human form, Jack's finding small town law enforcement challenging, to say the least.
And challenges don't come much greater than the audacious and bossy private investigator, Cassie Hunter who has come to town to claim her inheritance while conducting a covert operation of her own.
If Jack isn't finding it hard enough to deal with her, his bear has locked sights on the curvaceous and outlandish woman as his mate.
Assassins, bombs, kidnappers, guns and a mystery more than a century old - that's what Cassie brings to Jack's quiet mountain town.

Bear Ambush
Former Navy pilot Lt Jim 'Spider' Webb has been far too busy saving lives on Big Bear Mountain to look for a mate for his bear. But finding that elusive fated mate means everything to the bear.
Erin Parker is on a mission. The curvy, sassy reporter is snooping around the mountain for a big career making scoop. She's in the wrong place, for sure and it's definitely the wrong time.
The cartel is back and this time they've come in force, hell bent on vengeance.
Can Spider save his fellow shifters and protect Erin from the wrath of the cartel? Or is there more to this inquisitive and high-spirited girl than meets the eye?