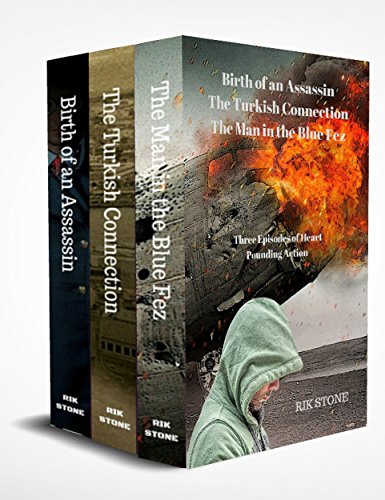 Birth Of An Assassin Box Set

This series of gritty, action packed novels has been brought together to give you a nail biting suspense.
-Birth of an Assassin
-The Turkish Connection
-The Man in the Blue Fez

This series of gritty, action packed novels has been brought together to give you a nail biting suspense.

Birth of an Assassin:
Set against the backdrop of Soviet, post-war Russia, Birth of an Assassin follows the transformation of Jez Kornfeld from wide-eyed recruit to avenging outlaw. Amidst a murky underworld of flesh-trafficking, prostitution and institutionalized corruption, the elite Jewish soldier is thrown into a world where nothing is what it seems, nobody can be trusted, and everything can be violently torn from him.

The Turkish Connection:
Mehmet battles for daily survival in the murky Istanbul of 1951 while being forced to learn the craft of theft and violence alongside the other street children. Come evening he curls up under a stinking jetty in a waterway off the Bosporus Strait. Desperation fills him as he yearns to break free from the life inflicted on him by his drunken, womanizing father, little knowing his rotting body lies at the bottom of those same waters.

The Man in the Blue Fez:
From a former death camp in the snowy Russian mountains of 1973, Jez Kord is sent into the freezing wastelands to prove himself fit. Pavel Rostislav has orders to hinder his progress and follows closely behind. They unite, but returning to camp the sky is filled with helicopter gunships and the flaming liquid of napalm bombs swallows up the entire complex. They run, but a unit of Spetsnaz elitists are hot on their heels.
Anna Kord is on assignment in Turkey with two other agents. Adam Mannesh and his twisted band of misfits have designs on a drug empire that Anna and the unit have been tasked to take down. Adam comes to their assistance, but then betrays them. Their only chance of survival hangs on Jez and Pavel evading the Siberian pursuit.