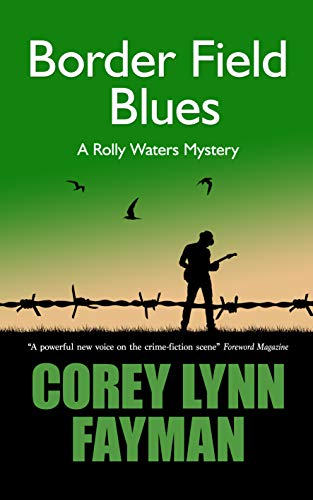 Environmentalists, border vigilantes, rock groupies, video gamers, garage bands and one extremely psychotic orderly clash in this mystery set along the San Diego-Tijuana border as a case of vandalism leads detective Rolly Waters into a dark world of sexual abuse, human trafficking and a series of unsolved murders.

Vandals destroy a bird sanctuary in Border Field Park. Political organizations mobilize for confrontation. Can guitar-playing detective Rolly Waters save a young woman from sex traders or is he just part an out-of-control video game?

Murder, sex, politics, and classic rock guitar collide in this original and compelling mystery set in the backcountry along the San Diego-Tijuana border, when a violent encounter between a young border-crosser and an angry bandit creates a secret and shocking bond between the boy and the bandit’s dumbfounded daughter. But when recovering guitarist and reluctant private detective Rolly Waters arrives at Border Field Park early one morning, he’s only there to help his bird-watching friend Max find the vandals who’ve destroyed a sensitive bird nesting area.

Feeling less than optimistic about nabbing the perpetrators, Rolly begins his due diligence, crossing paths with a local border vigilante, a tormented vaquero, and an aging rock groupie. A menacing house call from a scalpel-wielding orderly in pursuit of a prostitute named for an eighties pop hit confounds his case further. And when police detective Bonnie Hammond hands him a coroner’s report, he knows it’s turned deadly.

As their separate cases dovetail into one, Rolly and Bonnie negotiate a prickly partnership, dragged into a dark world of human trafficking and sexual abuse as they uncover tantalizing connections to an old murder case. Bonnie presses ahead with her official investigation, while Rolly turns to his wisecracking network of bohemian friends, trying to connect the red-haired seductress on a banned album cover to a popular video game. As opposing political organizations mobilize for a confrontation in the shadow of the Tijuana’s Bullring-By-The-Sea, Rolly races to save a willful young Mexican girl, his only link to the crimes that will test his psyche, his allegiances, and one family’s unspeakable past. Amid band gigs, family issues and personal temptation, the guitar-slinging detective rocks on, putting his sleuthing skills, and life, to the test.