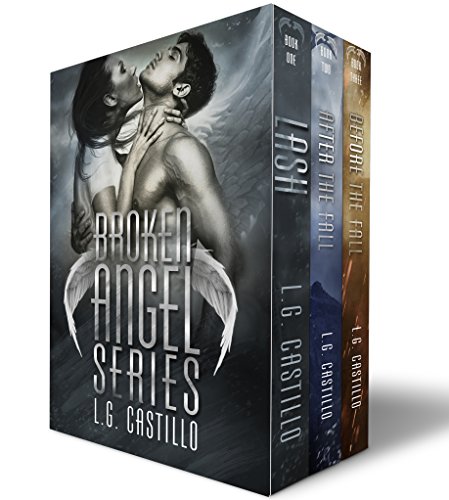 Get lost in this sweeping fallen angel saga filled with intoxicating romance and pulse-pounding suspense.
Banished angel Lash is given a chance to redeem himself with one simple mission--protect Naomi Duran. But when danger threatens, and his passion for her swells, will he choose his cherished home or his heart?

A fallen angel.
A forbidden love.
A decision that dares to defy the hands of fate.

LASH (Broken Angel #1)
Decades after being banished for saving a life he shouldn't have, a fallen angel, Lash, is given a chance to redeem himself. His mission: protect Naomi Duran. The assignment proves to be anything but simple when the Archangels withhold key information about Naomi and refuse to restore Lash's powers. When an unexpected source reveals centuries-old secrets, his trust is shaken to the core, and he begins to doubt those whom he had once considered to be his greatest allies.

Determined to avoid anything that would risk his chances of returning home, Lash struggles with the greatest obstacle of all—his growing feelings for Naomi. But when her life is threatened by an unknown source, Lash questions the wisdom of the Archangels and his ability to keep her safe.

Soon, Lash will have to choose where to place his trust—in the home he has fought so hard to regain or in the forbidden love he can't bear to lose.

AFTER THE FALL (Broken Angel #2)
There's a Spanish proverb that says, "From the thorn and the pain, a flower is born." Naomi Duran never really understood what that meant until she became an archangel.

Finally reunited with the love of her life, Naomi thought she had everlasting love and happiness in Heaven. Even with the rebellious Lash by her side, she learns that life as an archangel isn't easy.

When secrets of the past are finally revealed, tempers flare, brother is pitted against brother, and Naomi and Lash face the greatest threat to their relationship: choosing among love, family, or duty.

In the end, can this family of broken angels forgive past mistakes, or will they carry the thorn in their hearts forever, ripping their family apart?

BEFORE THE FALL (Broken Angel #3)
Lash remembered what Naomi's grandmother once told him long ago: "There is always light where there is love."

He kept those words close to his heart because they meant that the love between him and Naomi was destined. With the binding ceremony behind them, Lash and Naomi have even more questions about their past lives as memories resurface and they discover that they were kept apart by the one person they had thought was their greatest ally—Archangel Raphael. When the other archangels finally reveal the mystery of their ancient past, they uncover a story of lust, envy, betrayal, loss and descent into darkness.

In the wake of these revelations, will love be enough to keep their family together?