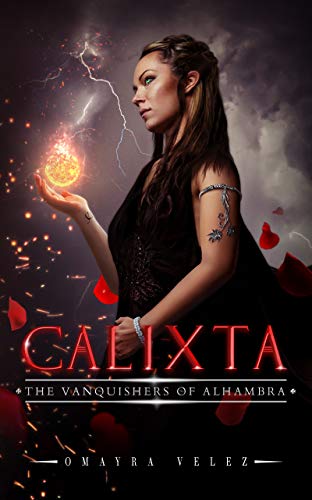 Calixta will never forget the first time she died, and neither would you.
Calixta is the first book in a new series, The Vanquishers of Alhambra. Explore this dark new series where a pen stroke blurs good and evil, honor, and prejudices. The poor souls in Alhambra live and die, shrouded under the long hand of their misguided faith and the influence of their trades.

She will never forget the first time she died, and neither will you.

Calixta's life will never be the after saving the life of her best friend and her unborn child and then dying. One bullet to the chest was all it took to kill her. But her body is recuperating fast. A faint memory of a Box Exchange Train Station in Heaven stirs, but surely that had to be a dream? Or was it real?

Evil came knocking at her bedroom window once more, when a shadow named Jadro entered and killed her again.

Calixta had a destiny, a gift, a power, and a task. She was a Vanquisher of evil and a protector of mages from birth. She had to return and do her task in Alhambra. The times were dark, and Calixta had been hidden in darkness for all her life. It was now her time to shine.