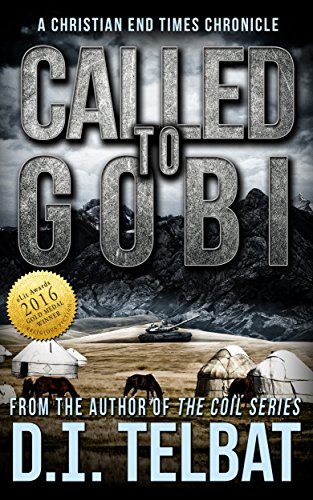 Called To Gobi begins on the brink of WW3. Andrew finds Christ and his calling while in prison. Against odds and with little support, he leaves the US, only to crash in the mountains. Between Russia, China, and apocalyptic terror, he hopes to reach Mongolian nomads with the gospel message.

A Christian End Times Chronicle by D.I. TELBAT, begins on the brink of World War III. American outcast Andrew Foworthy leaves the US to answer his call to take the Gospel of Christ to the nomads of Mongolia. Once a rebel and hooligan on the streets of New York City, Andrew found Christ and his calling while in prison. Against all odds and with little support, he begins his trek to the cold and brutal land where horses and dogs outnumber people.

But on a lonely mountaintop, a plane crash hurls Andrew into the Altai Mountains of Western Mongolia. With hope waning, and salvaging only a backpack and bicycle, Andrew struggles to survive on the edge of the harsh Gobi desert. If the feuding clans don't kill him, the weather just may!

Andy joins the nomadic Mongolian and Kazakh people where he is quickly engulfed in a raging conflict between the giant forces of Russia and China. He soon realizes his sacrifice for the nomads may demand the ultimate price when the clan's pagan traditions and their survival seem to stand between Andrew's zeal for God and his call to Gobi.

From the midst of End Times terror in a proud country, Andrew knows he was called to the Gobi region for one reason—to share the Gospel of Jesus Christ. But will violence, the arms of a beautiful woman, and pagan tradition hinder his calling?