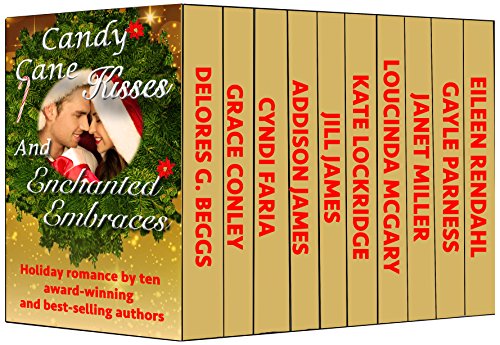 Dreidels and Demons, by Eileen Rendahl

All Melina wants is a normal wedding with the normal kinds of problems that normal brides have like drunk uncles and wilted flower arrangements. Such is not the life of a Messenger for the supernatural beings of Sacramento, however. Something is after her and it's not just her mother with another cake sample for her to taste.


Honor the Promise by Cyndi Faria

Expected to become a fourth generation firefighter, a young cadet discovers Latin dance unleashes his deepest desires and gives him the confidence to choose his own path.

Recently widowed Tammy Knox takes a holiday cruise at the urging of her daughter Avery and her best friend Dori Miller. Tammy is seeking a distraction from her increasingly lonely life, but she doesn't expect it to be in the form of her best friend's handsome, younger son. Is their New Year's endeavor destined to be a shipboard fling or true love?


Flame to Fire by Kate Lockridge

Nate Arbinger is a Helwyn, a demon hunter, who uses ancient ballads as a road map to track escapees from Hell. Battle weary, Nate has come home to Molly for the Yuletide season. Little does he know that a minor god and the Fates have other plans for his holiday…


The Christmas Con by Jill James

Two reformed jewel thieves, Robin and Ian, are on the job to retrieve a priceless necklace, but Santa has special plans for a reunion of the ex-lovers.

Alice Masters has two young children, no job, and Christmas is coming without a tree or decorations. When she begs her neighbor Rand Brown for the old Christmas tree he's thrown out, what starts as Just A Little Christmas turns out to be a lot more.

Elle, a fae who refused to return to the Faerie Court because of the abuse she'd endured, has been a guest in Sasha's home for the last six months. Sasha, a vampire with a violent past, was smitten by this sweetly elegant female. Can they heal each other on the winter solstice, the longest night of the year?

San Francisco cop Joe Maggiano runs into his long-lost flame on Christmas Eve - during a terrible fire! Will he and Gwyn be able to re-kindle their love over the course of a holiday weekend in charming Heart's Delight, California?


The Holiday Fixer by Addison James

A hacker is threatening the online dating site, Coupling, and head of product development, Wendy Ram, hired self-made billionaire security consultant, Zachary Evans, to fix the problem in time for their holiday promotion. A 21st century retelling of the holiday classic, The Shop Around the Corner.

When an image of her lost love appears on the old clock's face, Genoa can't let him disappear again, she can't!