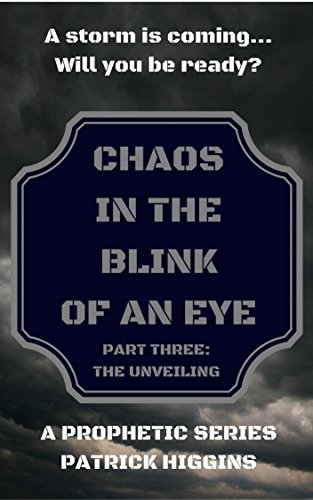 Chaos In The Blink Of An Eye: The Unveiling

It was the weekend before Thanksgiving. More than 100,000 fans were jammed inside Michigan Stadium. As the football was kicked into the snow-filled sky, long-foretold Bible prophecy came to pass before their very eyes, causing many to vanish into thin air without a trace.
It was just the beginning of things to come, as life as humanity had known it was forever changed in the blink of an eye...

On a cold and blustery, snowy Saturday in late November, more than 111,000 people were crammed inside Michigan Stadium, in Ann Arbor, Michigan, to watch the Michigan Wolverines play the Ohio State Buckeyes. It was a heated college football rivalry that had spanned more than a century.

No one inside the stadium was prepared for what would soon unfold. As the football was kicked into the snow-filled sky to start the game, long-foretold Bible prophecy came to pass right before their very eyes, causing many to vanish into thin air. Fear and panic filled the hearts of everyone still inside the stadium.

But what happened inside Michigan Stadium was only a drop in the bucket compared to the rest of the world. In the blink of an eye, life as humanity had known it was forever changed when the Great Disappearing Act came to pass. More than one billion people either vanished or were killed in the aftermath of the Rapture.

Those still remaining were in for a world of trouble. In the coming days, with all banks and businesses closed, ATM machines not spitting out dollar bills and credit cards not being accepted for the time being, humanity was temporarily separated from their assets. Until the world came back online, so to speak, those without cash reserves would remain cashless.

As world leaders converged on NATO Headquarters in Belgium for an emergency summit, the pressure was on to find ways to stabilize the situation as quickly as possible. With embargoes temporarily lifted from insurgent countries, leaders from every nation on the planet were expected to attend.

Many urgent crises would be discussed over the next few days, from burying the scores of dead bodies littering the planet, to protecting the borders of each country, to stopping the serious price gouging going on in the world. But mostly, they had to find a way to prevent a global recession from swallowing them whole, causing the planet they inhabited to spiral even further out of control.

Little did most know who would rise up to lead the way, or how quickly he would do it...