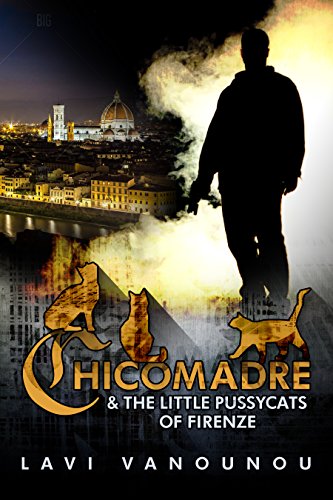 Chicomadre & The Little Pussycats Of Firenze

“Chico” is a young Israeli Mossad agent leading a lavish lifestyle with his girlfriend in the city of Florence. Assigned to assassinate five wealthy Hezbollah affiliates in Europe, he is elated to exploit the European assassination mission as his pre-Christmas shopping spree. But as pressure grows, his newly awakened conscience sends him into a dream-like mindset involving musical encounters and talking cats. Will he survive this mission and get promoted, or end-up like one of his contracts?

In the year 2006, after the end of the second Lebanon War, Israeli Mossad makes hasty decision to put out a contract on five wealthy Hezbollah-affiliated Arabs, residing in Europe. Agent "Chico" is assigned for the job.

He's a 30-something Mossad agent of a new kind: the kind that stays with the agency to maintain the lavish and expensive lifestyle he and his Italian girlfriend are perusing in the city of Florence. Naturally, Chico is elated to exploit the assassination missions in Western Europe as his personal pre-Christmas shopping spree. But surprising turns of events lead to a completely different scenario, which he could not expect...A comic visit to the life of a thrill-seeking Mossad agent

The new circumstances awaken in Chico a dormant conscience he did not know he possessed. Foe the first time, he is drawn to a personal reflection of the life and the profession he had chosen for himself. Between his dangerous and rewarding profession, and the dull life of an average Joe, what will he chose?A hilarious action drama that dispels the myth of patriotic Israeli secret agents

As the pressure grows, Chico's mind begins to play tricks on him. He drifts into a wacky dream-like state mind, involving occasional musical encounters and argumentations with talking cats. Will he survive this mission and get promoted, or end-up like one of his contracts?The Middle East conflict never looked so nutty. A fantastic action drama with an edge that will take you to uncharted and hilarious territories!