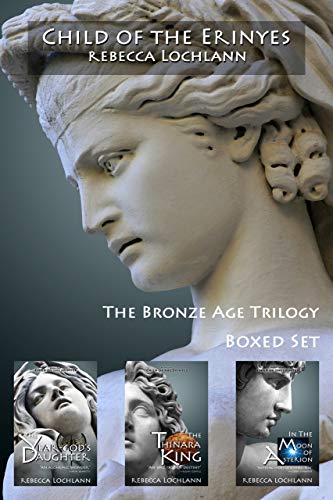 Child Of The Erinyes Collection: The Bronze Age

In the Bronze Age, two brothers risk their lives to bring about a coup on the rich and powerful island of Crete, their plots hindered only by desire for her princess. Their trickery will propel all three into an unimaginable future, and spark the immortal rage of the Erinyes.

THIS BOX SET CONTAINS THE FIRST THREE BOOKS IN THE CHILD OF THE ERINYES SERIES:
THE YEAR-GOD'S DAUGHTER
THE THINARA KING
IN THE MOON OF ASTERION

Note: Falcon Blue, while technically Book Six of the series, can be read right after this boxed set (The Bronze Age segment) without missing a thing.

The Child of the Erinyes: A new myth from ancient Greece. Epic historical fantasy inspired by Ariadne, Theseus, and the Minotaur.

Crete: where magic and mystery meet courage and hope.

Aridela: an extraordinary princess who dances with bulls.

Two brothers plot Crete's overthrow, but desire for this woman will propel all three into an unimaginable future, and spark the immortal rage of the Erinyes.

“Atmospheric, lyrical, and inspired. I envy readers newly discovering this riveting epic.” Lucinda Elliot, author of That Scoundrel Emile Dubois, Ravensdale, and The Villainous Viscount: or The Curse Of The Venns.

The set also includes excerpts from Book Four, The Moon Casts a Spell, Book Six, Falcon Blue, and Book Eight, Swimming in the Rainbow, the last book of the series.

Step into the Bronze Age....

For time beyond memory, Crete has sacrificed its king to ensure good harvests, ward off earthquakes, and please the Goddess. Men compete in brutal trials to win the title of Zagreus, the sacred bull-king, even though winning means they'll die in a year.

Two brothers from Mycenae search for weaknesses in this rich, coveted society, hoping to trick the competition and its formidable reckoning.

Hindering their goal is the seductive and fearless Cretan princess, Aridela, an uncommon woman neither brother can resist, and ancient prophecies that promise terrible retribution to any who threaten Goddess Athene's people.

A woman of keen instinct and unshakable loyalty. A proud warrior prince and his wounded half-brother. Glory, passion, treachery and conspiracy on the grandest scale.

What seems the end is only the beginning.