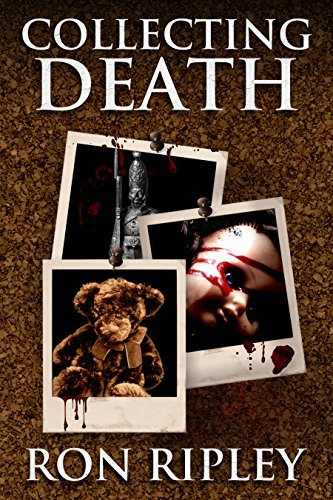 There’s more than meets the eye to a teddy bear, or a porcelain doll…their eyes glow with a murderous gleam as they thirst for human blood.
Historian Victor Daniels and paranormal expert Jeremy Rhinehart join forces to stop the tragic string of destruction and mayhem, before it’s too late…

Rolf the teddy bear looks sweet and warm. But in the dark, its eyes glow with a murderous gleam…
Stefan Korzh's parents built a life around collecting possessed items, in the throes of a peculiar game with the dead. Antique porcelain dolls, beautifully crafted teapots and an eerie teddy bear, all seemingly innocuous objects that encompass unimaginable evil, and malignant spirits who wish to inflict pain on the living.

His parents' obsession ruined Stefan's life, and he dreams of punishing the rest of the world for his poor luck of the draw. Dreams become reality when he sends the collectibles to unsuspecting customers. One by one, he eagerly watches the chaos that unfolds.

Victor Daniels, a historian exhausted by yet another academic conference, wants nothing more than to go home and see his wife. But tragedy cuts his hopes of comfort short. Seeking answers, he teams up with a paranormal expert by the name of Jeremy Rhinehart. The two discover a tangled web of haunted collectibles gleefully painting the town red with the blood of their new owners.

Time is running out, and they must stop Stefan from spreading further mayhem. But Jeremy and Victor are in over their heads, and the hellish objects' spirits will not rest until their pursuers join the ranks of the dead…