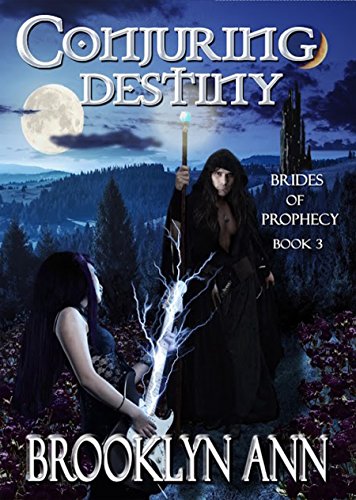 An eccentric rock star discovers that she's the prophesied savior of another world. After that, things get even weirder.

There’s more than a prophecy holding them together …

Famous rock star, Xochitl Leonine, has dreamt of a world with two moons where a black cloaked man beckons her. One Halloween night, she meets the mysterious stranger of her dreams… literally... and their shared dance becomes a rendezvous in a place of endless night.

Zareth Amotken has no idea how important Xochitl’s heavy metal band is to her. As an immortal sorcerer, he doesn’t care. He has one goal: to find the prophesied savior of his world. Her voice holds the power to bring back his world’s vanished sun.

Xochitl’s compassion urges her to help in any way she can. Yet learning the mysteries of her past causes conflict with her future in music. Her destiny in his world and her obligations to her band pull her in opposite directions. How can she long for one while the other is so dire?

As Zareth introduces her to his people and teaches her to control her powers, she aches for his enchanting kiss. Zareth tries to resist, for their passion will unleash serious consequences, both political and magical.

As the time to fulfill her destiny draws closer, she must choose between her heart, her duty, and her friends. The wrong choice could ruin everything.

But if Zareth’s evil half brother succeeds in taking control of her for his own ends, he will take away her choices… and destroy the world.