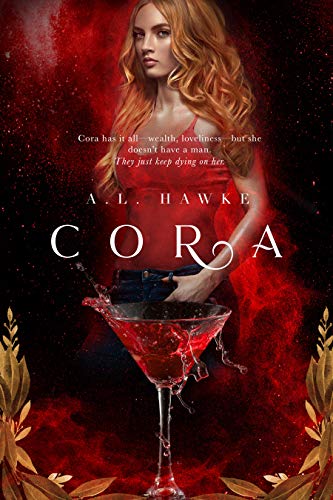 Cora is the immortal Greek goddess Persephone, living in a Malibu beach house in the twenty-first century. She falls for a handsome prim and proper realtor, Gabriel Cartwright, but the gods who are likely culpable for the death of Cora’s former husband care for Gabe too—they want him dead.

Cora has it all—wealth, loveliness—but she doesn't have a man. They just keep dying on her.

She is the immortal Greek goddess Persephone, living in a Malibu beach house in the twenty-first century. And no matter how much therapy she undergoes, nothing can ease her pain after the recent murder of her husband.

Until she meets Mr. Gabriel Cartwright, a prim and proper young East Coast realtor who's hired to arrange transfer of her things to her new home in Toronto. Cora likes him. He's tall, dark and yummy.

But Gabe holds a secret. He has Napean nymph blood, an ancestry that Imada, a despicable secret society of gods and goddesses, has been hunting for centuries. Cora knows this. That's why she hired him. She wants to be close to him. She wants to care for him. But Imada cares about him too—they want him dead.

Cora can heal wounds and move clouds, but she can't bring back her husband. Can her attraction to this new guy help her forget her loss? She has her ancient brutish lover Hades, the God of the Underworld, on her side. And Gabe has such a kind, sweet heart and is so handsome. Yeah, she'll keep her man or tear Imada apart trying.