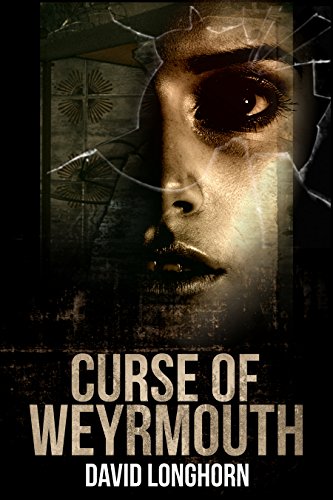 Erin Cale winds up in a small town filled with well-meaning locals. But it doesn’t take long before its plagued with a series of unexplained deaths.
Erin believes the nefarious secret is buried within the heart of the cathedral. And as she tries to unravel the mystery, the stones of the cathedral breathe with a life of their own…

A centuries old curse lusting for blood…
Weyrmouth, a small town in Southern England, is replete with quirky, well-meaning residents. Everyone is cheerful and friendly, but the quaint seashore province is not what it seems.

A deep and dark magic has captured the townsfolk of Weyrmouth in its clutches since the medieval times. Under stormy skies, a menacing cathedral looms over them, its history unknown … and everyone who has tried to disentangle its mysteries has come face to face with death.

In spite of this, Weyrmouth Museum is up and running, acting as the local repository of history and all things spooky. It finds a new employee in wayward American Erin Cale, who winds up in town looking for a job, in desperate need of a fresh start. But it doesn't take long before Erin feels the pull of something deeply unsettling.

Apparitions of ghastly hooded children appear out of thin air, warning of impending doom. Unexplained deaths begin to occur with ever-mounting frequency. And yet, Erin can't bring herself to leave.

Her curiosity gets the best of her as Erin begins to unravel the ancient and nefarious secret buried within the heart of the cathedral. She feels the undeniable pull of something tying her to the structure and its history, and is desperate to unlock the mystery.

All the while, the stones of the landmark cathedral seem to be breathing with a life of its own…