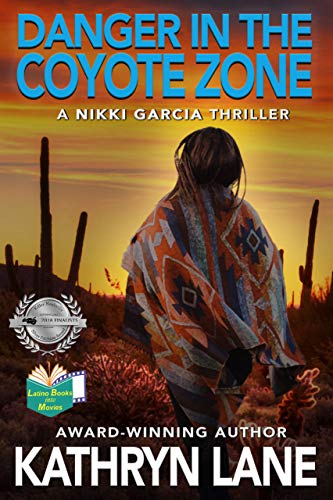 Danger In The Coyote Zone

Nikki García is assigned to Mexico to find a missing child. Her parents have been fighting over custody and suspect each other of kidnapping the child.
It promises to be an easy case until an irreverent, pot-smoking bag lady provides an eye-witness account of the girl’s abduction. Nikki goes undercover as she follows a group of treacherous human traffickers as they transport their victims toward the U.S. border.

A former international fraud auditor turned private investigator, Nikki lands an assignment in Mexico to find a missing ten-year-old child, Bibi Lombardi. Bibi’s estranged parents are fighting over her custody and one of them could even be responsible for her disappearance. It’s an easy child snatching case – right?

Nikki thinks so until a marihuana-smoking bag lady, accompanied by her dog Figaro, provides eye-witness information on the girl’s abduction. Following the bag lady’s leads, Nikki pursues a trail of dangerous criminals through picturesque colonial towns and barren deserts.

But when Bibi’s mother receives a ransom request, Nikki is already undercover with a gang of diabolical human traffickers, called coyotes. Her boss and fellow private eye, Floyd Webber, thinks Nikki received misleading information from the bag lady who purposely put her on the wrong path to prevent her from locating the child.

Or could the traffickers be headed to the U.S. border where Bibi’s fate could be far worse?

As the danger in Nikki’s quest increases, her fiancé, fearing the forces of evil will prevail, starts his own high stakes search to rescue the love of his life. Will he locate her before it’s too late?

And what about the missing child? Who is going to save her?