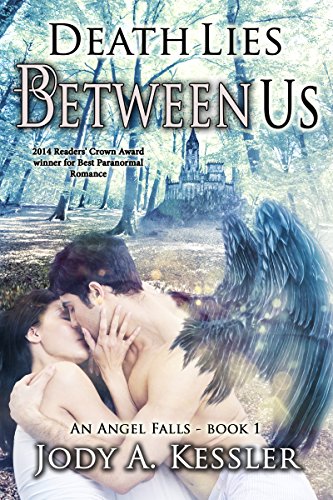 Death Lies Between Us

By: Jody A. Kessler

Frustrated with his position as an angel of death, Nathaniel casts aside the rules of the afterlife and saves nature-loving herbalist, Juliana, from a series of deadly accidents.
Will fate bring these two together, or has Nathaniel made the biggest mistake of his afterlife?

Saving the life of someone you love should not be the worst thing you have ever done, unless you're an Angel of Death.

Frustrated with his position as an angel, Nathaniel Evans casts aside the rules of the afterlife and rescues nineteen year old Juliana Crowson from freezing to death. His inability to watch Juliana suffer causes a sequence of deadly accidents, and he soon becomes her constant protector.

In the mountains of Colorado, Nathaniel comforts Juliana as she struggles to understand her paranormal abilities while coping with her guitar-playing brother's recently exposed secrets. When an ill-tempered Native American shaman teaches Juliana the difference between ghosts and place memories, she decides she wants nothing to do with the supernatural world. Too bad she doesn't know that Nathaniel is part of it.

Will fate allow them to be together, or has Nathaniel made the biggest mistake of his afterlife?